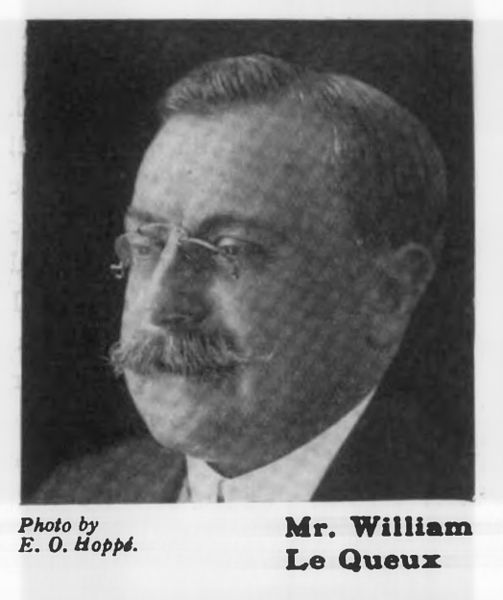 William Le Queux was a prolific author between 1891 and 1931. He wrote across a wide range of genres but is best know today for his Invasion / Future War novels in the two decades leading up to the Great War.

His most successful work was The Invasion of 1910, which originally appeared in serial form in the Daily Mail in 1906.  It was translated into twenty-seven languages and sold over one million copies in book form.

A complete list of works can be found at: http://en.wikipedia.org/wiki/William_Le_Queux and biographical details at: http://www.williamlequeux.com/

The Encyclopedia of Science Fiction has a short article: http://sf-encyclopedia.com/entry/le_queux_william

How Le Queux’s fiction related to the real world is well covered by Le Queux: How One Crazy Spy Novelist Created MI5 and MI6 by Graeme Shimmin at: http://graemeshimmin.com/william-le-queux-and-british-spying/

Brett F. Woods has an online assessment at: http://critique-magazine.com/article/lequeux.html

A biography was published in 2007: William Le Queux, Master of Mystery by Chris Patrick and Stephen Baister.