I started this site in Summer 2014 as a repository of material I had started to gather related to Invasion Literature of the Victorian and Edwardian ages.

The site is a resource centre for the Invasion (invasion-scare), Future War and early Spy literature that was popular between the 1870s and the start of the First World War.

The website’s name comes from Erskine Childers’s novel ‘The Riddle of The Sands’ published in 1903 and which remains the best known, and indeed for many the only known,  example of the genre today. This was also the novel that started my interest in the genre. 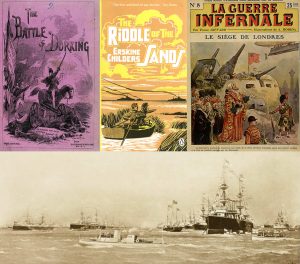 What is Invasion Literature?

Although I tend to use the phrase 'Invasion Literature' as a catchall one can argue that there are three distinguishable but overlapping categories of fiction: Invasion Literature - stories set in the near future that describe a planed or actual invasion of the homeland by an enemy. Future War Fiction - stories of future wars that are distinguished by new techniques of warfare or new technologies - such as air-warfare or submarines. Spy Fiction - stories of spies and espionage - either by the enemy or by the home country. Note: espionage is often a feature within the other categories ...
Read More 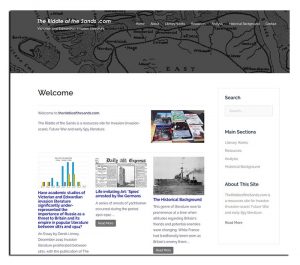 The subject area of invasion scare and future war novels can be extended to cover a vast array of novels including many in the science fiction genre. For the purposes of this site I have set boundaries as follows: Date: novels published between 1870 and 1914. Some later examples are included where they relate to the pre-war situation or have relevant continuity from pre-war novels. Origin: novels first published in Britain. There are occasional exceptions - e.g. French or German works translated and available in Britain during the Victorian / Edwardian period. A few books published outside Britain relating to ...
Read More