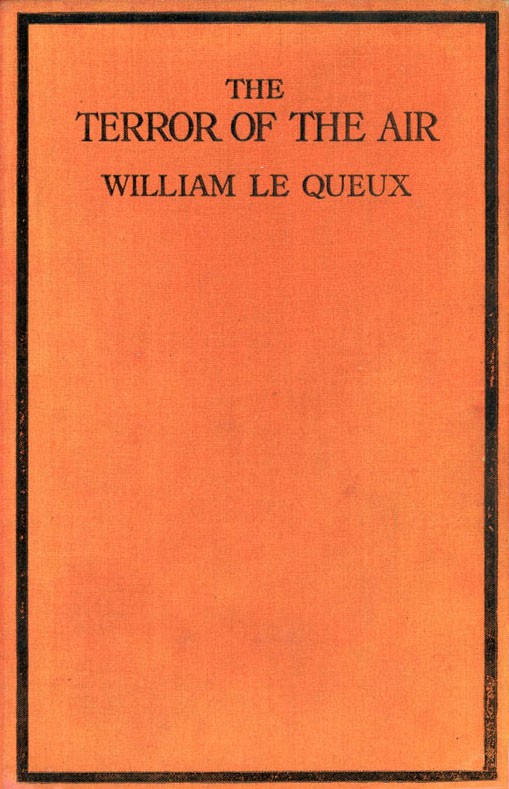 A few short years ago such a story as would have been characterised as wildly improbable if not absolutely impossible. But “today” we are well into the Aerial Age. Such a great pirate aircraft as Mr. Le Queux imagines is by no means beyond the realms of possibility, and a story such as he tells must cause thoughtful people to realise very forcibly the immense power which command of the air gives. The author describes vividly how the great pirate aeroplane terrorised the world, destroying aircraft and shipping, bombing London, New York and Paris, and spreading poison gas, disease germs and other horrors over its helpless victims. The account of the long war between the forces of order and the raider is full of breath-taking incidents, culminating in the thrilling and graphic description of the pirate craft’s ultimate destruction. At this tune, when aviation is making such vast strides daily, this story is of immense interest.

CHAPTER ONE THE COMING OF “THE TERROR”

I have all my life been a man of action rather than of words. I hate writing—even letters—and I detest talking about myself. Consequently, it is difficult for me to sit down and describe clearly the series of thrilling episodes which followed thick and fast upon the first appearance of that strange and mysterious personality whom the world—for want of a fuller knowledge—has unanimously decided to call the “Terror of the Air”.

So far as it has ever been made public, the story, of course, is familiar to everyone. But there is far more behind the bare facts hitherto revealed, and exaggerated by gossip, than the public guesses. No doubt there were good and sufficient reasons why the heavy hand of the Censor should be laid on a narrative which, were it fully told, would probably have produced some startling international complications at a time when it was essential for the peace of the world that the diplomatic barometer should register “set fair.”

The embargo has now been removed, and as, unhappily, I am the last survivor of the little band of officers who went through the affair from start to finish —who heard the “view halloo” and were “in at the finish”—l have yielded to the earnest persuasion of my old friend Mr. Le Queux, and have given him full access to the exhaustive diary which I kept during the playing out of the greatest air drama the world has ever seen.

To make my story clear, and to give an adequate idea of the paralysing effect of the appearances of the “Terror of the Air” on the mind of the public all over the world, I must, much as I detest ancient history, go back a few years.

The great world war into which the nations were flung in August, 1914, by the unbridled rapacity of Germany, and the unbounded megalomania of her half crazed ruler, came to an end in November; Germany—utterly crushed in the field, slowly starving to death, a prey to famine and Bolshevism appeared before the Council of the Allies, an unblushing mendicant, begging relief from the very peoples whom for years she had outraged and robbed without mercy. The world has seldom beheld a more nauseating spectacle. It was, and is, unpleasant to contemplate, and I mention it only to make my story clear. The bully of Europe fawned and cringed when thrashed in the manner of bullies of all ages. Of course, it is only fair to say that the German people as a whole knew nothing of what was being prepared; the secret could not have been kept had it been otherwise. None the less, as was fully established later, it was German cunning, German hatred, and German money which sent the “Terror of the Air” upon his fell mission. And behind him were the very men who planned and prepared the world war—the uncivilised and uncivilisable Junkers of Prussia.

By the end of I had reached the rank of a flight commander in the British Air Force, and had seen much of the later stages of the fighting, especially of the great bombing campaign which for six months had made the Rhine towns a veritable hell, and had done much to bring about the collapse of the vaunted German moral, which finally brought the Prussian edifice of world power crashing to the ground. My readers will remember how, after the war was over, the old Royal Air Force, growing, with the needs of the Empire, had become the British Imperial Air Force, the great patrol system which was so powerful a factor in guaranteeing the peace of the world.

I marvel still at the craft and ingenuity which for three years, as we found later, had baffled our closest observations, and enabled the “Terror of the Air” to bring his brutal plan to complete fruition. Personally I would have wagered every farthing I possessed that no such plan, in any country of the world, would have had the smallest prospect of success. Yet, as we know to our cost, the seeming miracle was wrought, and for six long months the commerce of the world lay under the shadow of a haunting terror, hundreds of lives and millions in treasures were lost, before we finally destroyed as unscrupulous a gang of ruffians as the old world ever bore upon its bosom.

With so much of a preliminary explanation, I can now plunge direct into my narrative.

After the war the world had become a very different place from what it had been. The noise of the great strife had died down; even the bickerings of the little peoples were hushed under the compelling power of the great League of Nations, which, as some enthusiastic idealists fondly imagined, had ushered in the era of universal peace. So far, at least, the League had justified the hopes of its founders. There were those, of course, who still believed that this state of things could not last; that man, the king of fighting animals, must, sooner or later, give way again to his primal instincts. But for the moment peace seemed firmly enthroned. Memories of the Great War were still too painful for civilisation to risk another titanic conflict. Commerce, relieved of the crushing burden of armaments, had made giant strides. The thousands of millions scattered and wasted in the war were being rapidly replaced. The workers, recovered from the passing insanity of Bolshevism, were busy, well paid, and contented. The scars of war were healed, the world was a better place than it had ever been before.

Yet once again German malice launched a thunderbolt from a clear sky.

It was on Mayday that I left England for New York on the great aerial liner, The City of London. I was just thirty one. I had attained the rank of major some years before—promotions slowed up considerably after the war!—and now, employed on the Air Staff, was bound on a mission of confidential consultation with the American authorities.

The City of London represented the last word in aerial science. Twelve hundred feet long, she was built throughout, even to her engines, of the wonderful new alloy invented by my old friend, Professor Collins, and known, after him, as collinium.