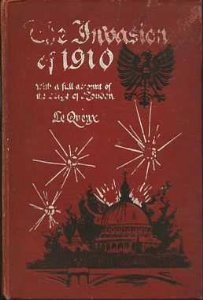 The novel was originally commissioned by Alfred Harmsworth as a serial which appeared in the Daily Mail from March 19, 1906. The story’s rewrite to feature towns and villages with high Daily Mail readership, greatly increased the newspaper’s circulation and made a small fortune for Le Queux; it was translated into twenty-seven languages, and over one million copies of the book edition were sold. The idea for the novel is alleged to have originated from Field Marshal Earl Roberts, who regularly lectured English schoolboys on the need to prepare for war.

The book takes the form of a military history and includes excerpts from the characters’ journals and letters and descriptions of the fictional German campaign itself.

It is centred on an invasion by the Germans, who have managed to land a sizable invasion force on the East Coast of England. They advance inland, cutting all telegraph lines and despoiling farmland as they go, and the British struggle to mount a proper defence, fighting a battle at Royston. The Germans eventually reach London and occupy half the city. A junior Member of Parliament declares that “Britain is not defeated” and organises a resistance movement, the “League of Defenders,” despite harsh reprisals by the Germans and a severe lack of arms. The Germans seem unable to combat this and tighten their control of London and suddenly find themselves faced with a popular uprising. Eventually, a newly formed British Army marches to liberate London. The fictional war, however, is a stalemate since it appears that German forces have managed to occupy Belgium and the Netherlands.

The failure of the British government to prepare for a possible invasion is repeatedly mentioned, as is the phrase “they should have listened to Lord Roberts”, along with many references to Roberts’ patriotism. It is also pointed out that the invasion might have been counteracted more easily if every able-bodied man had had military training. Le Queux himself stated that one of his aims was to “bring home to the British public vividly and forcibly what really would occur were an enemy suddenly to appear in our midst”.

Le Queux’s novel attracted the attention of the Gaumont Cinematograph Company in 1912, who planned to change the title to The Raid of 1915 and to film two endings, one with Britain as the victor and one with Germany as the victor. The British humour magazine Punch jokingly suggested they show the Britain victorious version in Germany and the other version in Britain. The film was finished in 1913 but its release was delayed by the British Board of Film Censors and when it was finally released in October 1914 (three months after the start of World War I), it had again been retitled, to If England were Invaded.