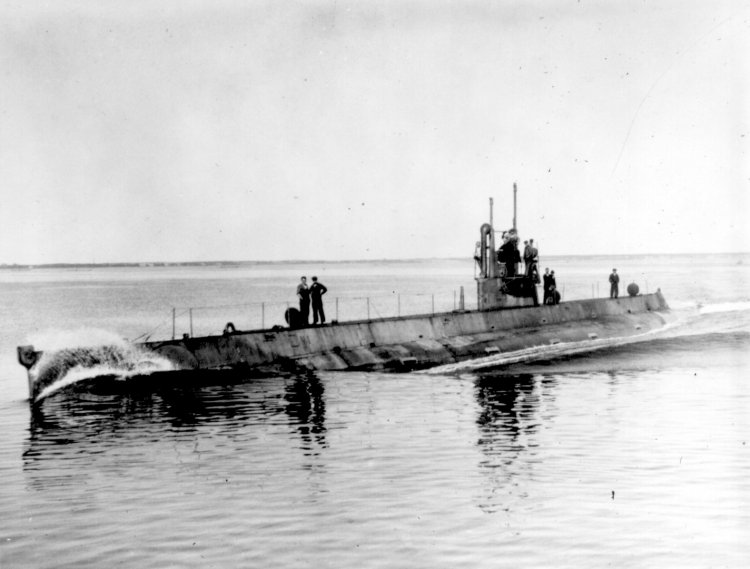 Farnham Bishop, 1916, The Story of the Submarine, The Century Co., New York

This book has been written for the nontechnical reader—for the man or boy who is interested in submarines and torpedoes, and would like to know something about the men who invented these things and how they came to do it. Much has been omitted that I should have liked to have put in, for this is a small book and the story of the submarine is much longer than most people realize. It is perhaps astonishing to think of the launching of an underseaboat in the year the Pilgrims landed at Plymouth Rock, or George Washington watching his submarine attack the British fleet in 1776. But are these things as astonishing as the thought of European soldiers wearing steel helmets and fighting with crossbows and catapults in 1916?

The chapter on “A Trip in a Modern Submarine” is purely imaginative. There is no such boat in our submarine flotilla as the X-4. We ought to have plenty of big, fast, sea-going submarines, with plenty of big, fast sea-planes and battle-cruisers, so that if an invading army ever starts for this country we can meet it and smash it while it is cooped up on transports somewhere in mid-ocean. There, and not in shallow, off-shore waters, cumbered with nets and mines, is the true battlefield of the submarine.

The last part of this book has a broken-off and fragmentaryviii appearance. This is almost unavoidable at a time when writing history is like trying to make a statue of a moving-picture. I have tried to do justice to both sides in the present war.

I wish to express my thanks to those whose kindness and courtesy have made it possible for me to write this book. To Mr. Kelby, Librarian of the New York Historical Society, I am indebted for much information about Bushnell’s Turtle, and to Mrs. Daniel Whitney, of Germantown, Pa., a descendant of Ezra Lee, for the portrait of her intrepid ancestor. Both the Electric Boat Company and Mr. Simon Lake have supplied me most generously with information and pictures. The Bureau of Construction, United States Navy, E. P. Dutton & Company, publishers of Mr. Alan H. Burgoyne’s “Submarine Navigation Past and Present”; the American Magazine, Flying, International Marine Engineering, the Scientific American, and the New York Sun have cheerfully given permission for the reproduction of many pictures of which they hold the copyright. Albert Frank & Company have given the cut of the advertisement of the last sailing of the Lusitania. Special thanks are due to Mr. A. Russell Bond, Associate Editor of the Scientific American, for expert advice and suggestion.

Some well-known pictures of submarines are herein credited for the first time to the man who made them: Captain Francis M. Barber, U. S. N. (retired). This officer published a little pink-backed pamphlet on submarine boats—the first book devoted exclusively to this subject—in 1875.

“The last time I heard of that pink pamphlet,” writesix Captain Barber from Washington, “was when I was Naval Attache at Berlin in 1898. Admiral von Tirpitz was then head of the Torpedo Bureau in the Navy Department, and he was good enough to say that it was the foundation of his studies—and look what we have now in the terrible German production.”