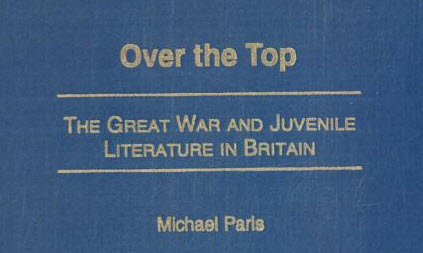 Paris, Michael, (2004)  Over the Top : The Great War and Juvenile Literature in Britain, Westport, Conn., Praeger

During the Great War, books and stories for young men were frequently used as unofficial propaganda for recruitment and to sell the war to British youth as a moral crusade. Until now, this literature has been neglected by academics, but the image of the war these fictions created was remarkably enduring and, despite the appearance of post-war literature of disillusioned veterans, continued to shape the attitudes of the young well into the 1930s. This is the first detailed account of how adventure fiction represented the Great War for British boys between 1914 and the end of the war. Paris examines how such literature explained the causes of the war to boys and girls and how it encouraged young men to participate in the noble crusade on the Western Front and in other theaters. He explores the imagery of the trenches, the war in the air, and the nature of war in the Middle East and Africa. He also details the links between popular writers and the official literary propaganda campaign. The study concludes by looking at how these heroic images remained in print, enduring well into the inter-war years. [Publisher’s Description]