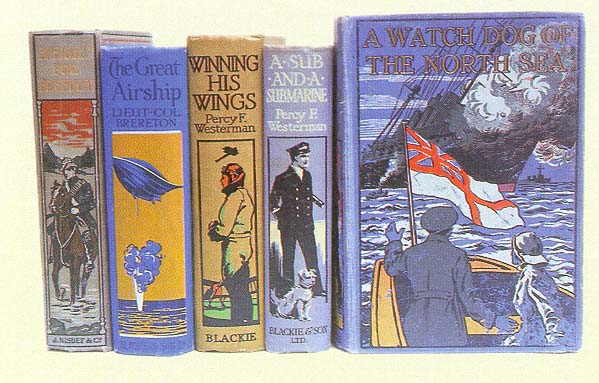 There are a number of articles specifically looking at Juvenile Fiction and its impact on the attitudes of boys:

In 1902 Frank Bullen, novelist and adventurer, that every British boy was a confirmed imperialist. So deep was the imperial faith, he said, that no youth would dare enter a school and “speak against the empire.” Were a boy to do so, Bullen noted approvingly, “he would promptly be knocked down.” Bullen was probably close to the truth, for in the late nineteenth and the early part of the twentieth century most British youths were acutely aware of their imperial heritage. They could scarcely have been otherwise. At schools, in church groups, in recreational associations at almost every turn boys were exposed to the imperial idea. Of the many sources of imperial sentiment that pervaded Victorian-Edwardian boy life, however, few were as prominent or as inspiring as popular literature, every Christmas hundreds of juvenile adventure novels appeared, novels that romanticized and glorified the exploits of British empire builders. Between times the ardor of young patriots was fanned by dozens of illustrated periodicals which provided readers of all social classes with an enticing array of imperialistic articles and tales. The adventure novels sold in their thousands; the penny weeklies in their millions.

Provides a somewhat different perspective by looking at literature aimed at a juvenile audience through ‘Boy’s story papers’. Written from a New Zealand perspective it nonetheless includes both local and British based publications.

An examination of Edwardian boys’ story papers demonstrates not only a fundamental shift in the traditions of juvenile literature but also the attitudes of Britons towards their continental neighbours. France, Britain’s traditional foe, had been replaced with a new, more dynamic and dangerous threat – Germany. Between the end of the Boer War in 1902 and the outbreak of the Great War in 1914, publishers of papers such as Boy’s Own Paper (BOP), Chums, and Boy’s Friend Library began to reflect changes in political, social and cultural attitudes by presenting both the British Empire as one undergoing constant challenges to its supremacy, and Germany as the source of this undeserved provocation. German characters in stories were portrayed as humourless, militaristic, and bullying, in direct contrast to Britons around the world who were viewed as honourable, just and fair.

In September 1914, nineteen-year-old Roland Leighton wrote to his close friend Vera Brittain, “I feel I am meant to take some active part in this war. It is to me a very fascinating thing -something, if often horrible, yet very ennobling and very beautiful, something whose elemental reality raises it above the reach of cold theorising. You will call me a militarist. You may be right.”  Leighton, like most other young men of his age, had grown to manhood under the spell of the pleasure culture of war — the experience of war transformed into romantic and chivalric stories for the entertainment of the young, and which had become increasingly common during the later nineteenth century. These fictions, however, were not only a source of exciting and escapist adventure, but promoted patriotism, manliness and a simplistic imperial worldview that emphasised duty and the need for sacrifice if the British Empire was to endure. They indoctrinated their readers with the credo that an Englishman was more than a match for any mere foreigner; that war was a game, and that battle was an exciting experience in which young men could demonstrate their loyalty to the motherland and find fame and honour. In the popular novels of G.A. Henty, Captain ES. Brereton, Herbert Strang, Percy F. Westerman and Robert Leighton, and in the pages of The Boy’s Own Paper, Pluck, The Boy’s Friend and countless other story papers, young men were captivated by thrilling tales of the little wars of empire such as With Spear and Assegai, Fighting the Matabele, With Kitchener in the Soudan or One of the Fighting Scouts. Other stories related the exciting events of imaginary future wars as the Russian hordes or the legions of the Kaiser invaded Britain and were only defeated at the last possible moment by English pluck. Indeed, so many of these tales appeared in the two decades before 1914, that many young readers were convinced that a great European war was virtually inevitable.

Michael Paris has also written a book on the subject:  Over the top: the Great War and juvenile literature in Britain