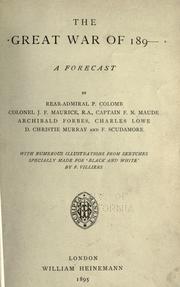 Such fears found powerful expression in a new and very popular genre of fictional writing: elaborate narratives predicting the outbreak and course of future wars. Seeking to entertain, to frighten, and to highlight the weaknesses of existing policy-making and strategic thought, literary, journalistic, and miItary expertise combined to construct evocative stories of conflicts yet to come. These stories proved an instant success with the public; the most popular sold ins of thousands of copies, raced through multiple editions, and were translated into numerous foreign Ianguages. As was intended, they acted as a powerful form of political advocacy. Starting with Lt.-Colonel George Chesney’s short story “The Battle of Dorking” (1871), which foresaw a weak and complacent Britain defeated by an aggressive German state, and which prompted Gladstone to publicly denounce the alarmism that it catalyzed, the genre reached its most sophisticated form in a collaborative narrative detailing the “The War of 189-” (1892), where Britain ended up fighting Russia and France. The editor of the illustrated weekly Black and White introduced the latter story as an important political Intervention at a time of heightened alert. The air is full of rumours of war. The European nations stand fully armed and prepared for instant mobilization. Authorities are agreed that a GREAT WAR must break out in the immediate future, and that this War will be fought under novel and surprising condition. The story explored those very conditions and, in so doing, made a case for stronger national and imperial defense. Among the leading contributors to this proliferating literature were a number of prominent advocates of Greater Britain, including the imperial federalist Admiral P. H. Colomb, who coordinated the team writing “The War of 189-,” a team that also included Dilke.   [ Duncan Bell (2007) The Idea of Greater Britain: Empire and the Future of World Order, 1860-1900 Princeton University Press. pp.38-39