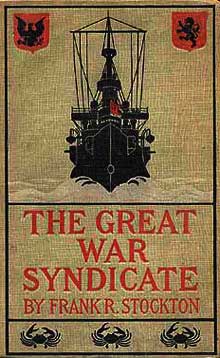 Later, when Stockton turned to novels, he continued to use sf themes occasionally, though his humorous style remained the most prominent feature. In The Great War Syndicate (1889) a naval Future War between the UK and America – set off by a renewal of American exceptionalist ire over the continued existence of Canada, and organized by a consortium of American entrepreneurs – is resolved when the British find arrayed against them various advanced Weapons, including invulnerable warships and a torpedo that travels at the speed of a cannon shell; the UK then surrenders. [SFE]

IN the spring of a certain year, not far from the close of the nineteenth century, when the political relations between the United States and Great Britain became so strained that careful observers on both sides of the Atlantic were forced to the belief that a serious break in these relations might be looked for at any time, the fishing schooner “Eliza Drum” sailed from a port in Maine for the banks of Newfoundland.

It was in this year that a new system of protection for American fishing vessels had been adopted in Washington. Every fleet of these vessels was accompanied by one or more United States cruisers, which remained on the fishing grounds, not only for the purpose of warning unwary American craft who might approach too near the three-mile limit, but also to overlook the action of the British naval vessels on the coast, and to interfere, at least by protest, with such seizures of American fishing boats as might appear to be unjust. In the opinion of all persons of sober judgment, there was nothing in the condition of affairs at this time so dangerous to the peace of the two countries as the presence of these American cruisers in the fishing waters.

The “Eliza Drum” was late in her arri val on the fishing grounds, and having, under orders from Washington, reported to the commander of the “Lennehaha,” the United States vessel in charge at that place, her captain and crew went vigorously to work to make up for lost time. They worked so vigorously, and with eyes so single to the catching of fish, that on the morning of the day after their arrival, they were hauling up cod at a point which, according to the nationality of the calculator, might be two and three-quarters or three and one-quarter miles from the Canadian coast.

In consequence of this inattention to the apparent extent of the marine mile, the “Eliza Drum,” a little before noon, was overhauled and seized by the British cruiser, “Dog Star.” A few miles away the “Lennehaha” had perceived the dangerous position of the “Eliza Drum,” and had started toward her to warn her to take a less doubtful position. But before she arrived the capture had taken place. When he reached the spot where the “Eliza Drum” had been fishing, the commander of the “Lennehaha” made an observation of the distance from the shore, and calculated it to be more than three miles. When he sent an officer in a boat to the “Dog Star” to state the result of his computations, the captain of the British vessel replied that he was satisfied the distance was less than three miles, and that he was now about to take the “Eliza Drum” into port.

On receiving this information, the commander of the “Lennehaha” steamed closer to the “Dog Star,” and informed her captain, by means of a speaking- trumpet, that if he took the “Eliza Drum” into a Canadian port, he would first have to sail over his ship. To this the captain of the “Dog Star” replied that he did not in the least object to sail over the “Lennehaha,” and proceeded to put a prize crew on board the fishing vessel.

The contest was not a long one. The “Dog Star” was of much greater tonnage and heavier armament than her antagonist, and early in the afternoon she steamed for St. John’s, taking with her as prizes both the “Eliza Drum” and the “Lennehaha.”

All that night, at every point in the United States which was reached by telegraph, there burned a smothered fire; and the next morning, when the regular and extra editions of the newspapers were poured out upon the land, the fire burst into a roaring blaze. From lakes to gulf, from ocean to ocean, on mountain and plain, in city and prairie, it roared and blazed. Parties, sections, politics, were all forgotten. Every American formed part of an electric system; the same fire flashed into every soul. No matter what might be thought on the morrow, or in the coming days which might bring better under standing, this day the unreasoning fire blazed and roared.

With morning newspapers in their hands, men rushed from the breakfast- tables into the streets to meet their fellowmen. What was it that they should do?

Detailed accounts of the affair came rapidly, but there was nothing in them to quiet the national indignation; the American flag had been hauled down by Englishmen, an American naval vessel had been fired into and captured; that was enough! No matter whether the “Eliza Drum” was within the three-mile limit or not! No matter which vessel fired first! If it were the “Lennehaha,” the more honour to her; she ought to have done it! From platform, pulpit, stump, and editorial office came one vehement, passionate shout directed toward Washington.

Congress was in session, and in its halls the fire roared louder and blazed higher than on mountain or plain, in city or prairie. No member of the Government, from President to page, ventured to oppose the tempestuous demands of the people. The day for argument upon the exciting question had been a long and weary one, and it had gone by. In less than a week the great shout of the people was answered by a declaration of war against Great Britain.