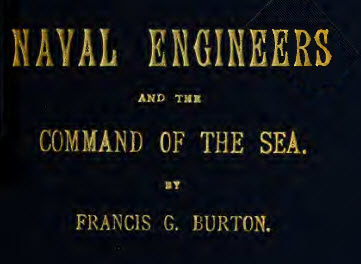 Francis G. Burton (1896), The Naval Engineer And The Command Of The Sea: A Story Of Naval Administration, Manchester, The Technical Publishing Company Ltd

We are so accustomed to think ourselves invincible at sea, if not on land; we glory so much in recollection of the victories of Hawkins, Drake, Rodney, Howe, Jarvis, Duncan, and Nelson; we are so proud of our majestic battleships and their unequalled crews, that we are apt to overlook the great change which has resulted from the introduction of steam as a motive power. We have, in the evolution of naval architecture, abandoned our tapering masts and spreading sails, and substituted for them paddles or screws; we have forsaken the equipment of the frigate, and reverted to one analogous to the old galley sweeps: we have discarded the sailing master for the gang driver, only that the slaves are now the steam boilers, and their driver the engineer, with his hand on the throttle. But just as in olden times, first the gang driver, and after the sailing master, were most necessary for the navigation of the galley or frigate, so in present days the engineer, down in the depths of her hold, is indispensable for the working of the modern ironclad. Indeed, he is more necessary than were the old drivers or masters, since the modern war vessel has become a floating mass of complex machinery, which can only be kept in proper order, and worked to the utmost advantage, by men specially trained in the methods and use of varied machines.

Unfortunately, the growing importance to the navy of highly-trained engineer officers and skilled mechanics has not yet been sufficiently recognised by the authorities, and the result has been a deep feeling of discontent throughout all branches of the engine-room staff. It is in order to direct public attention to this discontent, which threatens serious disasters to us in the event of war, that the following pages have been written.

I am deeply indebted to the writings of many previous and more competent authors : to Admiral Sir R. Vesey Hamilton, G.C.B., for his admirable work on “Naval Administration”; to Fleet Engineer Reginald C. Oldknow, for his treatise on “The Mechanism of Men-of-War “; to Mr. W. Laird Clowes, for his useful “Naval Pocket-book”; to the late Mr. James A. Longridge for his artillery researches ; and to the flies of the Times, for the numerous letters and reports on naval administration which have appeared therein during many past years. To the influence and guidance of such authorities as these must be ascribed any merit to be found in my story: the faults are wholly my own.