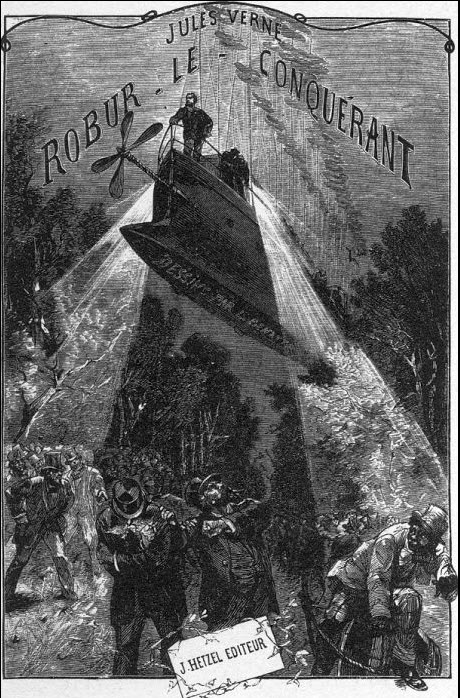 Jules Verne (1886) Robur the Conqueror [Robur-le-Conquérant] [aka. The Clipper of the Clouds]

Although somewhat outside the scope of Invasion / Future War Literature the subject matter is highly relevant as a science-fiction writer’s view on future warfare technology.

It was followed by a sequel Master of the World (Maître du monde) in 1904.

The story begins with strange lights and sounds, including blaring trumpet music, reported in the skies all over the world. The events are capped by the mysterious appearance of black flags with gold suns atop tall historic landmarks such as the Statue of Liberty in New York, the Great Pyramid of Giza in Egypt, and the Eiffel Tower in Paris. These events are all the work of the mysterious Robur (the specific epithet for English Oak, Quercus robur, and figuratively taken to mean “strength”), a brilliant inventor who intrudes on a meeting of a flight-enthusiast’s club called the Weldon Institute in Philadelphia, Pennsylvania.

Members of the Weldon Institute are all firm believers that mankind shall master the skies using “lighter than air” craft, and that “heavier than air” craft such as airplanes and helicopters would be unfeasible. The institute has been constructing a giant dirigible called the Go-ahead, and are having a heated discussion of where to place its propeller (in front to pull it, or behind to push it) when Robur appears at the meeting and is admitted to speak to them. He chastises the group for being balloon-boosters when “heavier than air” flying apparatuses are the future. When asked if Robur himself has “made conquest of the air,” he states that he has, leading to him accepting the title “Robur the Conqueror”. During his short time at the Weldon Institute, Robur so incites the members that they chase him outside. Just as they are about to attack him, Robur appears to vanish into the mob, but he has actually been borne away by a flying machine.

Later that night Robur kidnaps the Weldon Institute’s secretary, president, and the president’s valet. He takes them on board his ship, a huge, battery-powered, multirotor gyrodyne called the Albatross, which has many vertical airscrews to provide lift, and two horizontal airscrews in a push-pull configuration to drive the vessel forward. It bears the same black flag with golden sun that has been sighted on so many landmarks, and the music in the sky is explained to be one of the crewmen playing a trumpet. To demonstrate the vessel’s superiority, Robur takes his captives around the world in the course of three weeks. The president and secretary are angry at Robur for kidnapping them and unwilling to admit that the Albatross is a fantastic vessel, or that their notions of “lighter than air” superiority are wrong. They demand that Robur release them, but he is aloof and always says that they shall remain as long as he desires it. Fearing they will be held captive forever, the two formulate plans to both escape and destroy the Albatross.

After the horizontal propellers are damaged in a storm, the Albatross is anchored over the Chatham Islands for repairs. While the crew is busy at work, the two Weldon Institute members light a fuse and make their escape. They try to bring the valet with them but cannot find him, only later discovering that he had already escaped without them. The Albatross explodes and its wreckage, along with Robur and his crew, plunge into the ocean. Meanwhile the three escapees are safe on a small but inhabited island and are later rescued by a ship, then make a long journey back to Philadelphia.

The Weldon Institute members return, and rather than describe their adventures or admit that Robur had created a flying machine greater than their expectations of the Go-ahead, they simply conclude the argument the group was having during their last meeting. Rather than have only one propeller to their dirigible, they decide to have one propeller in front and another behind, similar to Robur’s design.

Seven months after their return the Go-ahead is completed and making its maiden voyage with the president, secretary, and an aeronaut. The speed and maneuverability of the dirigible marvels a huge crowd, but are trivial compared to Robur’s Albatross. Suddenly, out of the sky there appears the Albatross. It is revealed that when the Albatross exploded, enough of it was intact so that at least some of the propellers operated and slowed its descent, saving the crew. The crew used the remains of the Albatross as a raft until they were rescued by a ship. Later, Robur and the crew made it back to his secret X Island, where the original Albatross had been built. Robur has built a new Albatross and now intends to exact revenge by showing that it is superior to the Weldon Institute’s Go-ahead.

Having demonstrated his rule over the skies, Robur returns the three men to the ground. In a speech, Robur says that nations are not yet fit for union. He cautions the crowd that it is evolution, not revolution that they should be seeking. He leaves with the promise that he will one day return to reveal his secrets of flight.