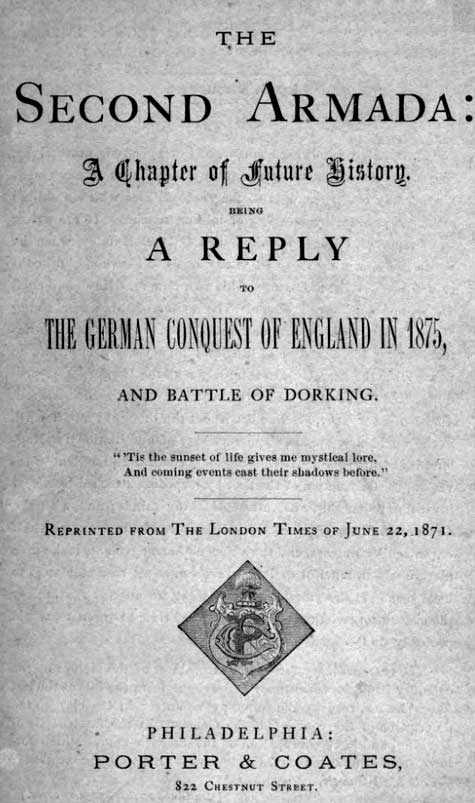 Abraham Hayward (1871) The Second Armada. A Chapter of Future History.

(aka. The Second Armada: A Chapter of Future History: Being a Reply to the German Conquest of England in 1875, and Battle of Dorking)

Britain defeats an American navy which has invaded the Irish Sea in 1875 in order to help the Fenians, who now control Ireland [SFE]

The story [Battle of Dorking] was seen as a ‘wake up’ call for rearmament and national preparation, a message which was emphasised by Abraham Hayward in Ins own more optimistic account entitled ‘The Second Armada’ which first appeared In The Times, in June 1871 and was then published by Porter and Coates in the same year. It was later reprinted in the Third Series of Hayward’s Biographical and Critical Essays in 1874. Hayward, in his version, described how Britain was under threat by a League of powerful nations. The nations intended to invade, assisted by the American navy and then conquer the country and divide the British Isles between member states. [ Anthony Chessell (2009) The Life and Times of Abraham Hayward, Q.C. Victorian Essayist ‘One of the Two Best Read Men in England‘]

“EVERYBODY is talking about it, and everybody is quite right. We do not know that we ever saw anything better in any magazine, or any better example Of the vraisemblance which a skilled artist can produce by a variety of minute touches. If the writer is, as reported, Colonel Hamley, then Colonel Hamley, when he wrote the charming story of ‘Lady Lee’s Widowhood,’ misconceived as a novelist the nature of his own powers. He should rival Defoe, not Anthony Trollope. The writer of this paper, living about 1925, gives his an account of his adventures as a Volunteer during the invasion of England. fifty years before, and so powerful is the narrative, so intensely real the impression it produces, that the coolest disbeliever in panics cannot read it without a lush of annoyance, or close it without the thought that after all, as the world now stands, some such day of humiliation for England is at least possible. The suggested condition precedent of invasion, the destruction of the fleet by torpedoes attached by a new invention to our ships, has attracted many minds; and with the destruction of the regulars, the helplessness of the brave but half organized Volunteers, and the absence of arrangement, make up a picture which, fanciful as it is, we seem, as we read it, almost to have seen. It describes so exactly what we all feel that, under the circumstance, Englishmen, if refused time to organize, would probably do.” – Spectator (London).

“The extraordinary force and naturalness of the picture of the calamity itself, its consistency throughout, from the bits of the last Times’ leader, read by the unhappy volunteer in the city, to the description of the conduct of the Germans in the fatal Battle of Dorking, and in the occupation of the English homes which follows, seem to us as natural in its touches as can well be conceived.—Pall Mall Gazette.