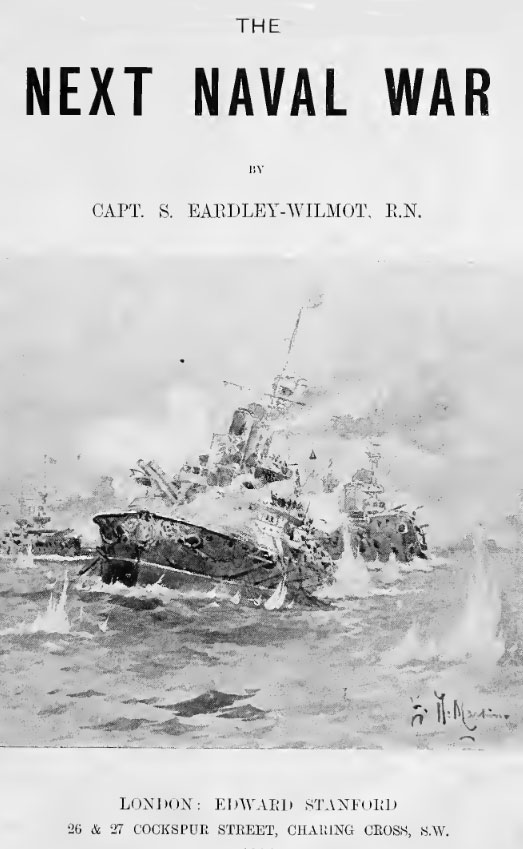 A description of a future naval war between Britain and France written by a respected naval writer and historian.

Eardley-Wilmot is an expert in naval matters, and it is interesting to read his predictions, put into the historical tense, of what will happen in 1895, when France declares war with us on our failing to comply with her demand for the immediate evacuation of Egypt. [Review in Spectator – 21st July 1894]

Extracts: Though the announcement in the morning papers of March the 1st, 1895, that the French Ambassador had presented to our Minister of Foreign Affairs the afternoon previously a demand for an early evacuation of Egypt by our troops, came upon the country like a clap of thunder, it was soon evident that for some years France had been secretly but energetically preparing for war. The great irritation against England of recent years, due to our prolonged stay in Egypt, had been much increased by the Congo treaty and the gradual extension of our influence north of Uganda. There was no doubt a footing in Khartoum from the south would soon follow, and we should thus obtain a hold upon Egypt, compared with which our present position in its northern portion is unimportant. The bitter animosity against Germany now was diverted to ourselves….

Among the various plans discussed by the great Council at Paris was the sudden attack by flotillas of torpedo boats at different points. Originally adopted as a weapon of coast defence and to keep off a blockading squadron, later developments of this craft had proved that within a radius of 100 miles they could assume the offensive—given sufficient hours of darkness to cover the distance, and they had every chance Of making their appearance without warning.