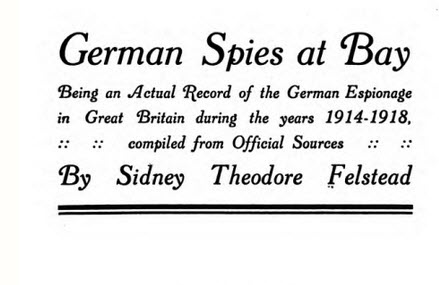 Sidney Theodore Felstead (1920) German Spies at Bay – Being an Actual Record of the German Espionage in Great Britain during the years 1914-1918, compiled from official sources

The late war has been unprecedented for many reasons, one of which is the large number of memoirs written by the sailors and soldiers who actually controlled the naval and military destinies of their respective nations. Such a proceeding is in vivid contrast to the past, and the effect of this frankness is likely to exercise a curious result on wars of the future. Whether that influence will be good or bad time alone can tell.

In presenting to the public a narrative Of the doings of the German spies in Great Britain during the time of the Great War I am hoping that the facts revealed will help to assess at their true worth of the methods by which the Germans make war. It would seem, to judge by the activities Of his Secret Service, that the Hun was by no means as clever as he would have had the world believe. Of course, against this must be reckoned the fact that. being a group of islands, we were in a much better position to resist the clandestine activities of the enemy than were our French Allies.

It would also appear that preparation is not everything. The Germans started the war with a great deal of preparation, in their Service as in everything else, but it availed them nothing in the end. During the months of the war our intelligence agents outnumbered those of the Germans by at least five to one. And I am afraid that arose from the fact that. although the enemy could not the allegiance of any true-born British subjects, even those whom he had interned in his prison camps, the same scruples were not ingrained in the breasts of the Germans. Thousands of them were only too glad to undertake espionage for one or another of the Allies.

This account of how our counter-espionage authorities frustrated the efforts of the German Secret Service in Great Britain is, I hope, but the forerunner Of many similar phases of the war. There are many marvellous stories still to be told, those dealing with inventions which a radical alteration in the course of the war. One in particular is that of the evolution of directional wireless telegraphy, an innovation which was directly responsible for Field-Marshal Lord Allenby trapping and destroying the Turkish Third Army in Palestine. In addition, this new method brought many Of the triumphs of the late Lieut.-General Sir Stanley Maude in Mesopotamia. Report has it that the inventor has up to date been rewarded with a Military Cross ! although I am not prepared to vouch for the truth of that statement.

CHAPTER 1 The German spy system in Great Britain prior to the war – Its destruction on the outbreak of hostilities.

I am writing this book that something may be known of the manner in which we were guarded from the secret perils of the late war. Countless volumes have been written revealing the glories of our armies in the field ; the Navy has had its deeds chronicled in brilliant fashion by writers who have had personal acquaintance with them.

But there is another side to the war of which all too little has ever been made known—that of the service which protected us against spies, against the terrible crime of sabotage, which wreaked such havoc in Russia and the United States of America, of our propaganda and counterpropaganda and a host of other things, all the more effective that little, if anything authentic, was ever said about them.

The time has come when it is possible for the veil to be lifted. But as a preliminary I should like the reader to understand that this is a narrative of fact. During the war an immense amount of fiction, alleged to be founded on actual happenings, was written around the doings of German spies in Great Britain. These stories, as may be imagined, gave an altogether false impression of the subtlety Of the German Secret Service, and they also credited the enemy with making a great deal more preparation than was actually so. What I have to tell is nothing but truth : I am not one who would weave a halo around the head of a German spy, especially in view of the fact that most of the enemy agents whom we brought to justice were hirelings, men and women who spied for what it would bring.

Of the multifarious duties of “Special Intelligence,” the department responsible for the duties I have just indicated, one could write without end. That of the Postal Censorship alone involved the employment of over four thousand people, and the results which sprang out of the work are to this day incalculable. By it we kept a check on the German spy system which brought to light some of the most astounding comedies and dramas of the war, stories of secret inks and ciphers which might well belong to the realm Of the writer of fiction.

The average man in the street will have little or no conception of the fact that we established during the war an Imperial and Inter-Allied Intelligence Organization which played an exceedingly successful part in defeating the enemy. He knows that we assumed control of the cables immediately war was declared : does he realize the colossal work involved in cutting Germany off from the outside world, of gradually closing down all her sources of supply, or the unceasing vigilance which was necessary that cipher messages should not flash across the ocean, eventually to reach a far-distant enemy agent, and result in some act of sabotage, or in the sending of a spy from a neutral country ?

Primarily, of course, the object of ” Special Intelligence was counter-espionage, and it is to that fascinating subject that this book is devoted. Who did not feel a thrill in the early days of the war when ” German spy ” was mentioned ?