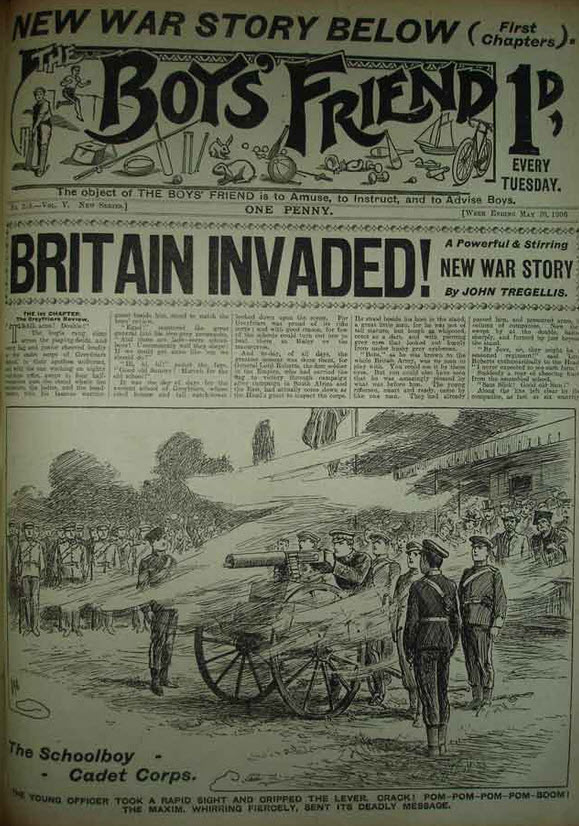 As 1914 neared the invasion stories came thick and fast. John Tregellis was the name under which many of them appeared. In 1912 this author had ‘The Flying Armada’ running in the Boys’ Friend, and ‘Britain Invaded’, followed by ‘Britain at Bay’, in the Marvel. In the Dreadnought was ‘The War in the Clouds’, not to mention a serial called ‘Doom’, which told of a great cataclysm overtaking the earth. ‘Britain Invaded’ started with the sudden cutting of the North Sea cables and the simultaneous dawn landing of five Army Corps totalling 200,000 men — at Hull, Boston, Cromer, Lowestoft and Frinton. In the battle from the word ‘go’ were the cadets of Greyfriars (not the Greyfriars) who rapidly became an élite corps. The Kaiser, whose yacht was on the scene at an early stage, was not to be killed. That instruction came from ‘higher up’. He was to be taken alive. [E.S. Turner (1948) Boys Will Be Boys: The Story of Sweeney Todd, Deadwood Dick, Sexton Blake, Billy Bunter, Dick Barton et al.]