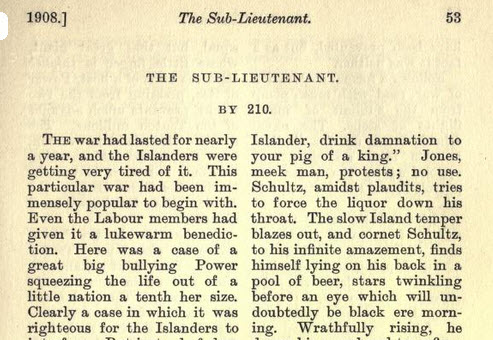 A naval war and blockade between Britain [? and Dutch] (Islanders) and Germany (Teutons).

THE war had lasted for nearly a year, and the Islanders were getting very tired of it. This particular war had been immensely popular to begin with. Even the Labour members had given it a lukewarm benediction. Here was a case of a great big bullying Power squeezing the life out of a little nation a tenth her size. Clearly a case in which it was righteous for the Islanders to interfere. But instead of dry-docking their ships and calling in their reserves, what must they do but trust at first to moral suasion and peaceful protests. Teutonia and moral suasion As well attack an ironclad with a brad-awl as expect her to listen to a protest unbacked by fleets and armies.