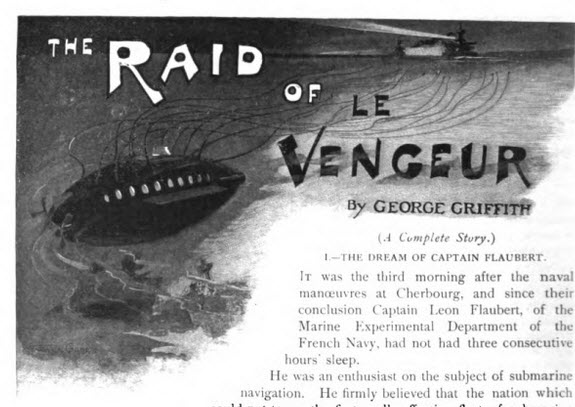 It was the third morning after the naval manoeuvres at Cherbourg, and since their conclusion Captain Leon Flaubert, of the Marine Experimental Department of the French Navy, had not had three consecutive hours’ sleep.  He was an enthusiast on the subject of submarine navigation. He firmly believed that the nation which could put to sea the first really effective fleet of submarine vessels would hold the fleets of rival nations at its mercy and acquire the whole ocean and its coasts as an exclusive territory. To anyone but an enthusiast it would have seemed a wild dream and yet only a few difficulties had still to be overcome, a few more discoveries made, and the realisation of the dream would be merely a matter of money and skilled labour.  Now the Cherbourg evolutions had proved three things. The submarines could sink and remain below the surface of the water. They could be steered vertically and laterally, but once ten feet or so below the water, they were as blind as bats in bright sunshine.

Moreover, when their electric head-lights were turned on, a luminous haze through which it was impossible to see more than a few metres, spread out in front of them and this was reflected on the surface of the water in the form of a semi-phosphorescent patch which infallibly betrayed the whereabouts of the submarine to scouting destroyers and prowling gun-boats. The sinking of a couple of pounds of dynamite with a time-fuse into this patch would have consequences unspeakable for the crew of the submarine since no human power could save them from a horrible death.

It as the fear of this discovery that had caused the rigid exclusion of all non-official spectators from the area of the experiments. Other trials conducted in daylight had further proved that the dim, hazy twilight of the lower waters was even worse than darkness. In short, the only chance of successful attack lay in coming to the surface, taking observations, probably under fire, and then sinking and discharging a torpedo at a venture. This, again, was an operation which could only be conducted with any chance of success in a smooth sea. In even moderately rough weather it would be absolutely impossible.

It was these difficulties which joined to a thousand exasperatingly stubborn technical details had kept Captain Flaubert awake for three nights. For him everything depended upon the solution of them. He was admittedly the best submarine engineer in France. The submarines had been proved to be practically non-effective. France looked to him to make them effective.

The troubles in the Far East and, nearer home, in Morocco, had brought the Dual Alliance and the British Empire to the verge of war. At any moment something might happen which would shake a few sparks into the European powder magazine. Then the naval might of Britain would be let loose instantly. In a few hours her overwhelming fleets would be striking their swift and terrible blows at the nearest enemy–France– and yet, if he could only give the submarines eyes which could see through the water, France could send out an invisible squadron which would cripple the British fleets before they left port, destroy her mightiest battleships and her swiftest cruisers before they could fire a single shot, and so in a few days clear the Narrow Seas and make way for the invasion of England by the irresistible military might of France. Then the long spell would be broken, and the proudly boasted Isle Inviolate would be inviolate no longer.

It was a splendid dream–but, until the submarines could be made to see as well as steer, it was as far away as aerial navigation itself.

Day was just breaking on the third morning when a luminous ray of inspiration pierced the mists which hang over the border land of sleep and waking, of mingled dream and reality, amidst which Flaubert’s soul was just then wandering.

He sat bolt upright in his little camp bed, clasped his hands across his close-cropped head, and, hardly knowing whether he was asleep or awake, heard himself say:

“Nom de Dieu, it is that! What foolishness not to have thought of that before. If we cannot see we must feel. Electric threads, balanced so as to be the same weight as water–ten, twenty, fifty, a hundred metres long, all round the boat, ahead and astern, to port and to starboard! Steel ships are magnetic, that is why they must swing to adjust their compasses.”

Facsimile of original publication available at: http://babel.hathitrust.org/ (Online browser only not mobile)