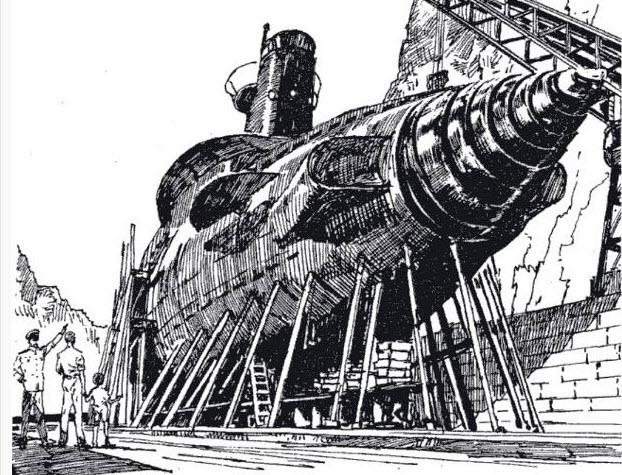 Oshikawa Shunro (1900) Kaitei gunkan (The Submarine Battleship) (aka. The Undersea Battleship or The Underwater Battleship)

Invasion literature had its impact also in Japan, at the time undergoing a fast process of modernization. Shunrō Oshikawa, a pioneer of Japanese science fiction and adventure stories (genres unknown in Japan until a few years earlier), published around the start of the 20th century the best-seller Kaitō Bōken Kidan: Kaitei Gunkan (“Undersea Battleship”): the story of an armoured, ram-armed submarine involved in a future history of war between Japan and Russia. The novel reflected the imperialist ambitions of Japan at the time, and foreshadowed the Russo-Japanese War that followed a few years later, in 1904. When the actual war with Russia broke out, Oshikawa covered it as a journalist while also continuing to publish further volumes of fiction depicting Japanese imperial exploits set in the Pacific and Indian Ocean – which also proved an enormous success with the Japanese public. In a later career as a magazine editor, he also encouraged the writing of more fiction in the same vein by other Japanese authors. [Wikipedia]

Into this growing and profitable field stepped a young Oshikawa Shunro with a new adventure story, modeled on Yano’s Ukishiro and written while still a student at Tokyo Semmon Kakko (Waseda) where he studied politics. A relative introduced Oshikawa to Iwaya who loved the young man’s new story and quickly took him under his wing at Hakubunkan. With a preface written by Admiral Ito Yuko, a veteran of the Sino-Japanese War, Oshikawa’s new adventure novel Kaitei gunkan (The Submarine Battleship) made its debut in 1900. The novel was a huge hit among boys 8 to 15. Almost overnight Oshikawa had created a new genre of children’s stories known as the adventure novel. …..Kaitei gunkan was actually part of a six-novel series published between 1900 and 1907, all of which took as their point of departure Japanese passivity in the face of predatory foreign imperialism. Kaitei gunkan traces the exploits of a disgruntled former naval officer Captain Sakuragi and his hardy band of patriots who build a new submarine battleship on a secret island. The ship, the denkopan is submersible, capable of flight and is armed with futuristic torpedoes and a new ramming technology. Throughout the series, Sakuragi and his men battle the Russians, the French and the English, destroying them all. They even fight on the side of Filipino “freedom fighters” against American imperialists. Written before, during and after the Russo-Japanese War, Oshikawa’s novels rode the rollercoaster of war fever and then disgruntlement over the treaty that followed. In the process, he introduced thousands of Japanese boys to adult concerns about Japan’s weakness vis-a-vis the great powers and apprehension over an increasingly enervated youth. In the process, Oshikawa ignored Japan’s own predatory impulses and re-channeled them into patriotic sacrifice for a people fighting to secure their destiny. [Owen Griffiths , Militarizing Japan: Patriotism, Profit, and Children’s Print Media, 1894-1925, http://www.japanfocus.org/-Owen-Griffiths/2528]

Another modernization tactic promoted in the Meiji period (1868—1912) was the translation of foreign books — works of fiction, as we I as science and philosophy — into Japanese, which the sakoku policy had prohibited. One of the first foreign authors to become popular was Jules Verne (Around the World in 80 Days (1873) was translated in 1879, to great acclaim, followed by at least six more of his novels in the early 1880s). His science-based adventures appealed to a country trying to imagine its way into modernity, and the technological know-how and confident insouciance of his protagonists were soon replicated in Japanese popular fiction, such as Oshikawa Shunrô’s 1900 Undersea Warship (Kaitei gunkan), which featured a submarine even more high-tech than Nemo’s Nautilus.[“From the Meiji restoration to the Second World War: the beginnings of manga, anime and Japanese sf”, The Routledge Companion to Science Fiction]