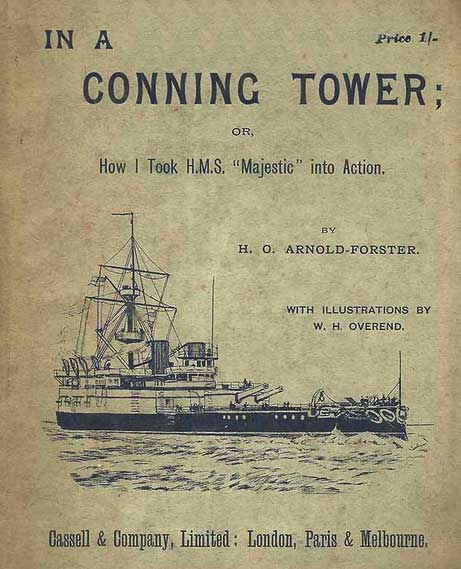 Hugh Oakeley Arnold-Forster (1888) In a Conning Tower; or, How I Took H.M.S. “Majestic” into Action. A Story of Modern Ironclad Warfare, Murray’s Magazine

Hugh Oakeley Arnold-Forster (1855 – 1909), was a British politician and writer. He notably served as Secretary of State for War from 1903 to 1905. From boyhood he had devoted himself to the close study of naval affairs and of warships. His love of the sea was insatiable, and he spent many a holiday cruising in a Thames barge, which he fitted out in quite homely fashion. In 1884 he inspired the famous articles on ‘ The Truth about the Navy ‘ (published by Mr. Stead in the ‘Pall Mall Gazette’), which led to a large increase in the navy estimates under the Gladstone government and to endeavours of later governments to place the navy on a footing of adequate efficiency. In a forecast of a modern naval battle entitled ‘ In a Conning Tower ‘ (1888) he showed a technical knowledge remarkable in a civilian. [Wikisource]