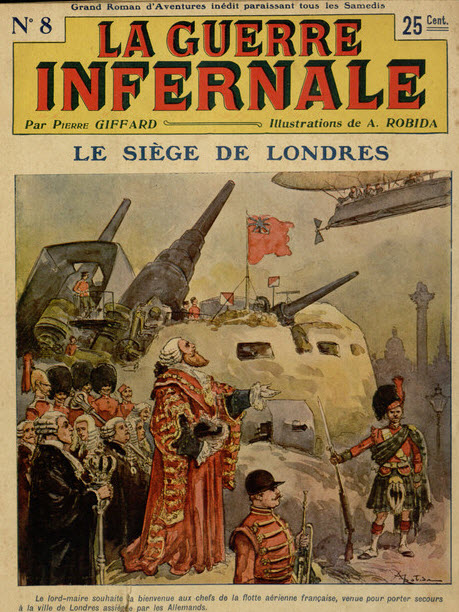 La Guerre Infernale was an adventure novel for children, published as a serial, an edition appearing every Saturday. The 520 illustrations were created by Albert Robida. It described the second world war, years before it happened, describing an attack on London by the Germans and war between Japan and the United States. It was subsequently republished as a book. [Wikipedia]

Still, some futuristic visions did dream big, like the colorfully illustrated 1908 French serial La Guerre Infernale, which anticipated the second World War more than the first with its massive scale and outlandish weaponry. [WW1 Online]

A comprehensive description (in French) with many illustrations is at: http://www.merveilleuxscientifique.fr/auteurs/robida-alfred-la-guerre-infernale/

The full text/images of five editions can be found at: http://digital.library.villanova.edu/Collection/vudl:292001