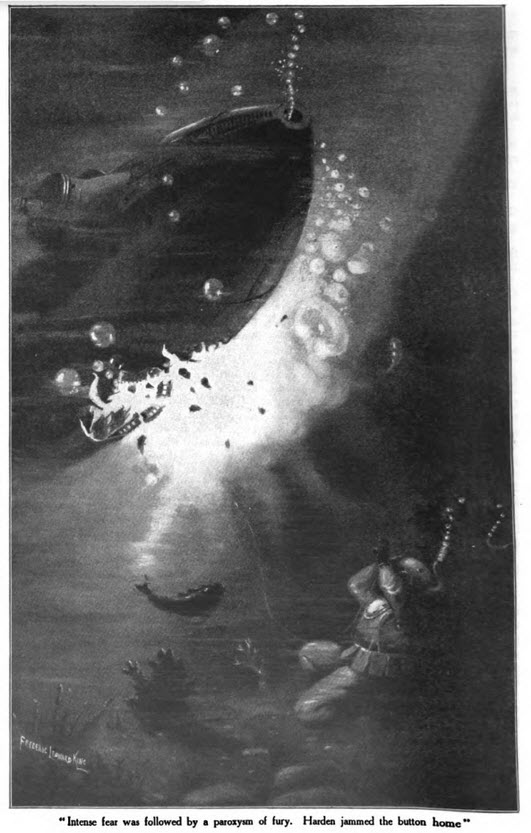 A short story of a disabled British battleship taking refuge and defending itself against a submarine attack by a diver blowing up the submarine with a mine.

In Walter Wood’s story, “Submarined,” the lieutenant of a damaged battleship turns the tables on an enemy submarine. The battleship Samson limps into an out-of-the-way cove to make repairs, but is spotted by an enemy torpedo boat, which quickly withdraws. The crew of the Samson realizes the enemy will send a submarine at night to finish off the battleship; they discuss their options. Lieutenant Harden convinces the captain to allow him to don an underwater suit and take the ship’s only remaining mine, and wait along the path the submarine must take. When the underwater boat is close enough, Harden explains, he will detonate the mine, thereby “submarining” the submarine. The scheme works, but Harden sacrifices his life in the process, as the crew knew he must. The attitude of the ship’s captain is that submarine warfare is not “honest fighting,” as there is “no way of guarding against them.” So, Harden’s sacrifice is particularly poignant insofar as it is a maneuver against which the submarine itself has no defense. [Antulio Joseph Echevarria (2007) Imagining Future War, p.71]