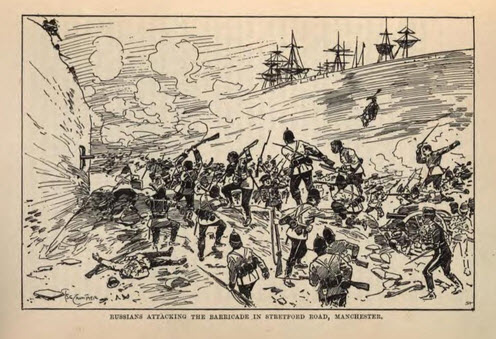 The majority of the literature is concerned with conventional warfare and especially an invasion of Britain.

I.F. Clarke, in Future-War Fiction: The First Main Phase, 1871-1900 identifies a flood of British naval stories in the 1890s – an effect of the interest in many new types of warship and of the increasing tension between the United Kingdom and France, the only comparable naval power at that time.

One of the topics for future war novels was the invention of the submarine. There was a concern that Britain’s invincibility as an island and with the world’s largest navy could be compromised by submarine attacks and that Britain could be blockaded.

Britain’s position in the naval arms race was largely based upon the Dreadnought class battleships. These had large, long-range guns that rendered them largely impregnable from lesser surface ships. They could however be vulnerable to surprise attack by submarine.

One of the key examples in future war literature is George Griffith’s Le Raid of Le Vengeur (1901) – this story is printed in I.F. Clarke’s (1995) The tale of the next Great War, 1871-1914 : fictions of future warfare and of battles still-to-come

Michael Paris has written about aerial warfare in his book: Winged Warfare: Literature and Theory of Aerial Warfare in Britain, 1859-1917 and also in an article: Fear of Flying: The Fiction of War 1886-1916 – discussing early aerial warfare fiction.

One of the key novels is George Griffith (1893) The Angel of the Revolution: A Tale of the Coming Terror

A lurid mix of Jules Verne’s futuristic air warfare fantasies, the utopian visions of ‘News from Nowhere’ and the future war invasion literature of Chesney and his imitators, it told the tale of a group of terrorists who conquer the world through airship warfare. Led by a crippled, brilliant Russian Jew and his daughter, the ‘angel’ Natasha, ‘The Brotherhood of Freedom’ establish a ‘pax aeronautica’ over the earth after a young inventor masters the technology of flight in 1903. The hero falls in love with Natasha and joins in her war against society in general and the Russian Czar in particular. [Wikipedia]

See the article on Plans and Fears of a Channel Tunnel