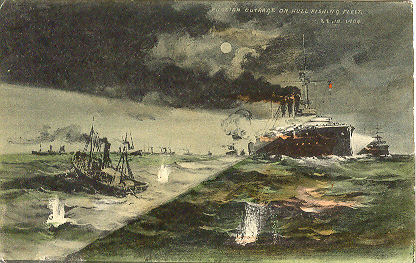 In October 1904 the Russian Navy attacked a fleet of British trawlers.

The Dogger Bank incident (also known as the North Sea Incident, the Russian Outrage or the Incident of Hull) occurred on the night of 21/22 October 1904, when the Russian Baltic Fleet mistook some British trawlers in the Dogger Bank area of the North Sea for an Imperial Japanese Navy force and fired on them. Russian warships also fired on each other in the chaos of the melée. Three British fishermen died and a number were wounded. One sailor and a priest aboard a Russian cruiser caught in the crossfire were also killed. The incident almost led to war between Britain and Russia. ….. The incident led to a serious diplomatic conflict between Russia and Britain, which was particularly dangerous due to the Anglo-Japanese Alliance. In the aftermath some British newspapers called the Russian fleet ‘pirates’ and the Russian admiral Zinovy Rozhestvensky was heavily criticised for not leaving the British sailors lifeboats. The editorial of the morning’s Times was particularly scathing: “It is almost inconceivable that any men calling themselves seamen, however frightened they might be, could spend twenty minutes bombarding a fleet of fishing boats without discovering the nature of their target.” [Wikipedia]

There is a write-up at the Scarborough Maritime Heritage Centre. and also by Robb Robinson, Maritime Historical Studies Centre, University of Hull

It is the subject of a thesis by Karen Kitzman Jackson: The Dogger Bank Incident and the Development of International Arbitration.

A report on the inquiry into the “Incident in the North Sea (The Dogger Bank Case) – Report of the Commissioners, drawn up in accordance with Article VI of the declaration of St. Petersburgh of the 12th (25th) November, 1904. Great Britain   v.  Russia” can be found at:  The Commission of Inquiry (1905).