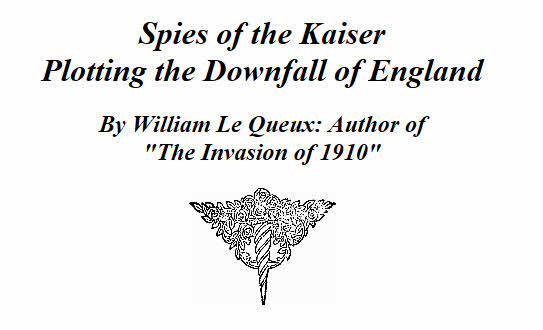 Spy fiction can be seen as a genre in its own right but it also intersects with Invasion and Future War literature especially in the late 19c / early 20C.

A good introduction is available at: Encyclopedia of Espionage, Intelligence, and Security at http://www.faqs.org/espionage/In-Int/Intelligence-Literature.html

How fiction related to the real world is well covered by Le Queux: How One Crazy Spy Novelist Created MI5 and MI6 by Graeme Shimmin at: http://graemeshimmin.com/william-le-queux-andbritish-spying/

There is material on Edwardian Spies and Literature in the Edwardian Promenade website at http://www.edwardianpromenade.com/category/espionage/

A detailed academic discussion on the background to the literature and historical context is available in Hampshire, J. (undated) “‘Spy Fever’ in Britain, 1900 to 1914.” Historian, Historical Association http://www.history.org.uk/resources/student_resource_596_107.html (subscription required)

Hitchner, T. A. (2010) Espionage literature and the training of the modern British hero .(Details in Secondary Sources – Academic Theses)

Nicholas Hiley has published a series of papers on the reality of Anglo-German espionage activity:

A climate of spy-hysteria dominated not only public discourse in England in the period 1907-14, but also the counsels of the War Office’s German intelligence subsection, whose officers remained convinced that the Germans were planning an invasion of England despite the naval infeasibility of such a plan. They convinced themselves on flimsy evidence that the few genuine German spies in England were only a small part of a vast network doing advance work for the German assault. Their self-delusion fostered public fear and distrust of the Germans.

The nearly complete failure of British military intelligence to alert Britain to German preparations for World War I, including the possibility of Germany’s invading Great Britain, was due to the extraordinary restraints placed on British spies and intelligence services. They were limited to answering specific questions, which were not often relevant to pertinent information.

Popular obsession with German espionage in the early 1900s proved to be well-founded, as Nicholas Hiley shows in an examination of the pre-war activities of a group of agents controlled by the ‘Kaiser’s Spymaster’.

One of the most famous successes of the British Security Service, popularly known as MI5, was its great spy round-up of August 1914. According to all previous histories, official and unofficial, Vernon Kell, the first head of MI5, masterminded the arrest of 21 out of the 22 German agents working in Britain, crippling the German intelligence network within hours of the outbreak of the First World War. The event is still celebrated by MI5, but a careful study of the recently-opened records shows it to be a complete fabrication. This article examines the six surviving lists of suspects to show how and why MI5 created and perpetuated this remarkable lie.

The 2009 Authorized History of MI5 carried a new defence of its August 1914 operation, in which Vernon Kell, its first Director, supposedly scored a coup by capturing all 21 German agents working in Britain. The Authorized History went against the version of events given in my article ‘Entering the Lists’, published by this journal in 2006, and backed up its case with a new arrest list. This article considers that new list, and its supposed origins in an MI5 document from 1931. Once again it demonstrates the impossibility of turning MI5’s foundation myth into history, by showing that not only is the account in the Authorized History internally inconsistent, but the arrest list consists of 22 names arbitrarily selected from later case summaries, then wrongly footnoted to an MI5 document which contains a different list of 21 names. Indeed, by claiming authority from the only arrest list known to have been challenged within MI5 itself, the Authorized History merely reinforces the conclusion that Kell fabricated his most famous victory.

Other Works on Historic Aspects of Espionage

Knightley, P. (2003) The Second Oldest Profession – Spies and Spying in the Twentieth Century

Morton, J. (2010) Spies of the First World War – Under Cover for King and Kaiser