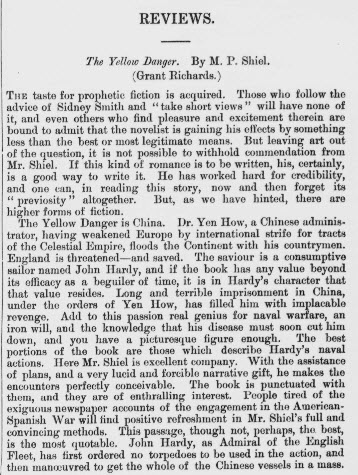 The taste for prophetic fiction is acquired. Those who follow the advice of Sidney Smith and “take short views” will have none of it, and even others who find pleasure and excitement therein are bound to admit that the novelist is gaining his effects by something less than the best or most legitimate means. But leaving art out of the question, it is not possible to withhold commendation from Mr. Shiel. If this kind of romance is to be written, his certainly, is a good way to write it. He has worked hard for credibility, and one can, in reading this story, now and then forget its “previosity” altogether. But, as we have hinted, there are higher forms of fiction.

The Yellow Danger is China. Dr. Yen How, a Chinese administrator, having weakened Europe by international strife for tracts of the Celestial Empire, floods the Continent with his countrymen. England is threatened – and saved. The saviour is a consumptive sailor named John Hardy, and if the book has any value beyond its efficacy as a beguiler of time, it is in Hardy’s character that that value resides. Long and terrible imprisonment in China, under the orders of Yen How, has filled him with implacable revenge. Add to this passion real genius for naval warfare, an iron will, and the knowledge that his disease must soon cut him down, and you have a picturesque figure enough. The best portions of the book are those which describe Hardy’s naval actions. Here Mr. Shiel is excellent company. With the assistance of plans, and a very lucid and forcible narrative gift, he makes the encounters perfectly conceivable. The book is punctuated with them, and they are of enthralling interest. People tired of the exiguous newspaper accounts of the engagement in the American-Spanish War will find positive refreshment in Mr. Shiel’s full and convincing methods. This passage, though not, perhaps, the best, is the most quotable. John Hardy, as Admiral of the English Fleet, has first ordered no torpedoes to be used in the action, and then manoeuvred to get the whole of the Chinese vessels in a mass. The stages by which such a result was reached are admirably indicated. Then:

“And thus it has suddenly happened that the whole yellow fleet is packed into a mere bundle of ships whose crews can speak to each other, whose steersmen need be cautious to avoid collision.

And when Hardy sees them so – herded together by his harsh and baleful forethought – like sheep driven into the penfold – he knows that the yellow wave is damned, and the greatest of his works is accomplished.

He could shriek aloud with cruel glee….

Abroad roams his eye over the sea at his sinking and battered fleet. And as he looks, he sees the foundering of the Nile.

And swift, with concentrated fury, the massed Japanese open fire on his feeble residue.

At that moment the two limbs of the British are not more than three hundred yards from the front of the enemy.

And at that moment it is that an appalling, horrid, unparalleled thing is happening to the Yellow Men.

Hardy has signalled to his ships to launch among the crowding enemy every possible torpedo in his fleet.

His prohibition to use torpedoes in the combat had led his captains to expect some such final order. They were well ready.

The torpedo was, of course, the most deadly of the then instruments of war. If it exploded beneath a ship, without fail it destroyed her. But precisely the most deadly was also, in general, the most unreliable of weapons. In general it might be counted upon to explode, not beneath an enemy’s ship, but beneath a friend’s; or, more likely still, beneath nothing at all. No serious tactician depended upon it.

In other words, it was not a good engine of aim at a given target for it usually missed the target. Its course was more or less deflected by the waves – many things happened to it.

It was left to the eye of Hardy to perceive that its proper function was not one of aim at all toward a particular target, but one of loose direction toward a general mass. Under such conditions it might be counted on to annihilate in an instant all the assembled navies of the earth.

Prompt upon his order, the restes of his fleet, shattered as they were, were able to launch a ripping navy of nine more torpedoes than there were crowding Japanese and Chinese ships. The Hirosaki sent five; one from a bow-tube above the water-line, four submerged. All the other ships were ships with a varying number of tubes.

Three exploded in mutual collision before they reached the hostile fleet.

Men clapped and squeezed their hands upon their ears in expectant horror. The sea began to start, and rush, and quake. A swift series of venomous, behemoth bangs – quickening into ever madder swiftness – and bawling at last into a steady brooling roar of passionate volleyed thunder that seemed to proceed from the very throat of Jehovah – rent the universal air, and split the hearing of all about that sea.”

In his desire to lend verisimilitude to his narrative, Mr. Shiel has had recourse to various tricks. He shows us a performance at the Palace Music Hall with Miss Lottie Collins singing the praises of his hero; and, after the delivery of England, he quotes from the poems composed to celebrate the event by Mr. William Watson and Mr. John Davidson. To Mr. Francis Thompson fell the more distinguished part of prophesying the nature of the warfare of the future – i.e., by aerial men-of-war! Mr. Shiel’s parodies or imitations are not very successful, and in many parts of the story he has lost his sense of proportion and gone astray in the pursuit of irrelevance; but The Yellow Danger remains an exciting and persuasive romance, well worth packing up with one’s holiday outfit.