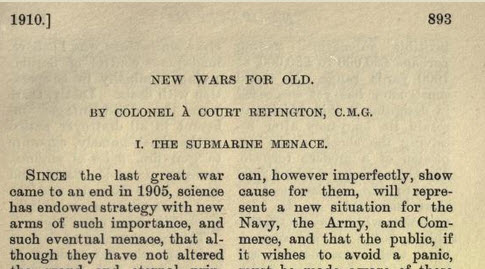 In a 1910 article for Blackwood’s Magazine, Colonel Repington declared that ‘It is also certain that it must be a perfectly hated Idea to senior officers of the Navy that a wretched little submarine should dominate waters in which a Dreadnought proudly sails.’ Repington’s choice of language is important: as a supporter of submarines, he sought to highlight the lack of rationality that coloured many people’s views of the submarine. [Duncan Redford (2010) The Submarine: A Cultural History from the Great War to Nuclear Combat, p.79 ]

SINCE the last great war came to an end in 1905, science has endowed strategy with new arms of such importance, and such eventual menace, that although they have not altered the grand and eternal principles of strategy, they have so gravely altered the conduct of war, and of naval war in particular, that we are bound to rearrange and sort out our ideas afresh, and to prepare for war of a character wholly different from that which the majority of us, even professionals, have hitherto anticipated……

I will first endeavour to show cause why neither Dreadnoughts, pre-Dreadnoughts, nor superDreadnoughts will, a few years hence, have any place in a naval war waged in such narrow waters as those of the North Sea. I am not going to’ discuss the idea which presided over the armour and armament of these monsters. I wonder why they sacrifice buoyancy, offensive power, coal capacity, and speed to the pleasure of carrying armour which can be pierced by the projectiles of the guns of the ships which they are built to fight; and I wonder why, as we have guns which can pierce the armour of the ships of our rivals, we should cast about for a heavier gun which will pierce armour of a greater thickness than any ship carries.