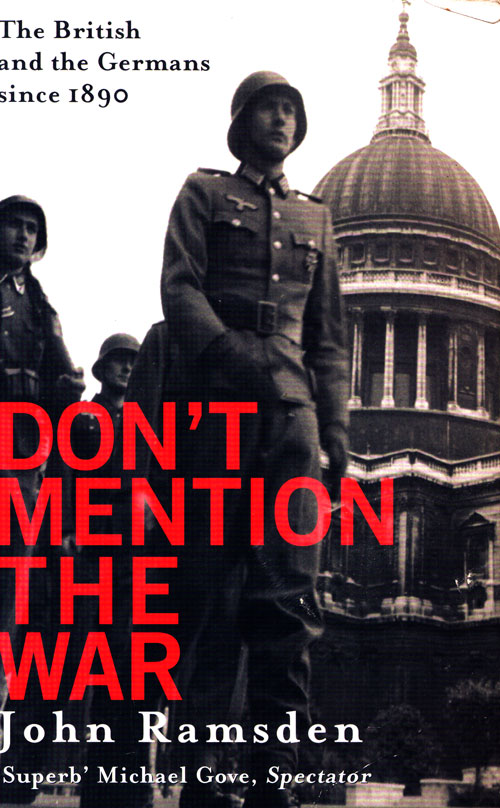 While this book covers attitudes towards Germany and the Germans from 1890 through the 20C it has a chapter that focuses on the period prior to the First World War that discusses the impact on Invasion and Spy Literature upon public opinion and upon official policy.

The Times decided in 1891 that ‘Germany does not excite in any class among us the slightest feeling of distrust or antipathy’ – the zenith of a century in which Britons admired German culture and our monarchy was closely involved with Germany royalty. Yet twenty-five years later began the era of world wars in which Britain and Germany were twice pitted against each other. After 1945, it seemed that Britain would learn to co-exist on happier terms with newly democratic Germany, yet persistent memories of 1940 have slowed that process, hesitations reinforced by the showing of war films on television, chants on the terraces, and populist tabloid gibes.

John Ramsden’s groundbreaking book looks at every aspect of Anglo-German relations for the last 100 years: from the wars themselves to how they have been seen by the tabloids as re-enacted in subsequent football matches. And he askes ‘What is the British problem with Germany?’ As Foreign Secretary Ernest Bevin once said ‘I tries ‘ard, but I ‘ates ’em’.  (Publisher’s description)

Rant: Unfortunately the publishers decided to exclude the endnotes from the published edition (the endnote markers are in the text) and they were only available on the author’s website which now no longer exists. (See e.g. http://blogs.telegraph.co.uk/news/guywalters/100047264/in-praise-of-endnotes-and-superscript-numerals/ )

There are reviews at: