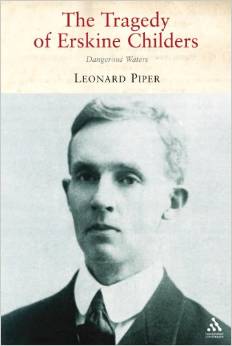 In The Riddle of the Sands, a gripping spy story set amongst the shoals and mists of the North Sea coast in the years before the First World War, Erskine Childers fathered the modern genre of spy adventures, as well as writing a great yachting classic. Unlike John Buchan or John le Carré, however, Childers himself led a life involving spying, gun-running and conspiracy, and a constant search for adventure and danger, which led in the end to his execution by firing squad in Ireland in 1923.
The Tragedy of Erskine Childers tells the extraordinary story of a brilliant and highly talented eccentric. A pioneering yachtsman in the early days of small yacht sailing, Childers became such a fervent supporter of Irish nationalism that he ran guns to Ireland on his boat. In the Irish Civil War his extremism, and wish to take part in active service rather than write propaganda, led to his betrayal, trial and execution. (Publishers description)

A review can be found in the Guardian: http://www.theguardian.com/books/2003/may/17/featuresreviews.guardianreview11