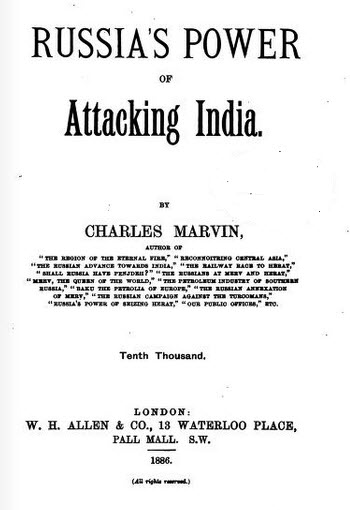 A very succesfull analysis of the threat to India from Russia in the late nineteenth century.

PREFACE.  In the spring of this year I wrote these words in ‘The Russians at the Gates of Herat’ :

“Let me make the appeal that, if you thoroughly appreciate the importance of preserving Herat, you will not imply content yourself with silent acquiescence. The press and the platform are open to you to give publicity to your support, and if you have means you can help in the dissemination of pamphlets to keep alive public feeling to the danger of the Russian advance. I have never rejected anyone’s co-operation in the sacred task of safeguarding India from the menace from the north, and gratefully place on record the encouragement which has been given to my efforts by the sympathy conveyed to me by my readers. With your help I may be able to do more than I am doing ; without it, I remain just as determined as ever not to allow Russia to have Herat while my tongue and my pen can prevent it.”

In response to this appeal, I have been asked by some patriotic persons to issue a cheap popular pamphlet specially intended to bring home the leading facts of the Russian advance to the masses. Neither on the part of those patriotic persons, nor on my own, has any thought of profit been entertained with regard to this issue, and, therefore, both they and the writer will be glad of the co-operation of others to diffuse the facts contained in it, if those facts be deemed, on examination, worthy of farther diffusion. I have no desire to provoke popular feeling against Russia, or to incite this country to Jingoistic enterprises. I simply make known what appears to me the real danger of the Russian advance, and the proposals eminent English generals have made to ward it off. If Indie is worth keeping, it is worth guarding. To guard India effectually is, to my view, the greatest of English interests to-day, and it is the duty of every Englishman to see that the guardianship of so Imperial interest not placed in negligent, indifferent, or incapable hands.