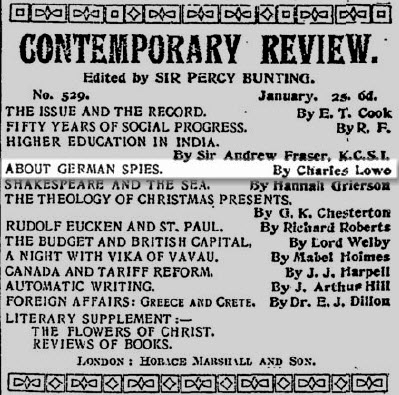 Journalist Charles Lowe wrote in 1910: “Among all the causes contributing to the continuance of a state of bad blood between England and Germany perhaps the most potent is the baneful industry of those unscrupulous writers who are forever asserting that the Germans are only awaiting a fitting opportunity to attack us in our island home and burst us up.” [Wikipedia]

In order to combat this fear, many denied that there was any cause for concern. For example, journalist Charles Lowe examined the evidence used to justify fears about the potential for a German invasion. He found the assertions ridiculous, writing in the Contemporary Review,

“Unscrupulous spy-sensations of our Yellow Press constitute acts of criminal levity against the peace of two kindred nations-a poisoning of the wells of public truth-and that, too, at a time when each country is only too ready to believe the worst of the other. Such conduct is none the less a public crime for its being beyond the reach of Public Prosecution.”   [Ansley Macenczak (2010) German enemy aliens and the decline of British liberalism in World War I]

It should also be stressed that many contemporaries found the more febrile of the scaremongers simply laughable. In 1910 Charles Lowe, a former Times correspondent in Berlin, inveighed against books like Le Queux’s Spies of the Kaiser, not because he did not believe that the German General Staff sent officers to gather information on England and other potential foes, but because the evidence adduced by writers like Le Queux was so slight. [Niall Ferguson, 1999, The Pity of War]