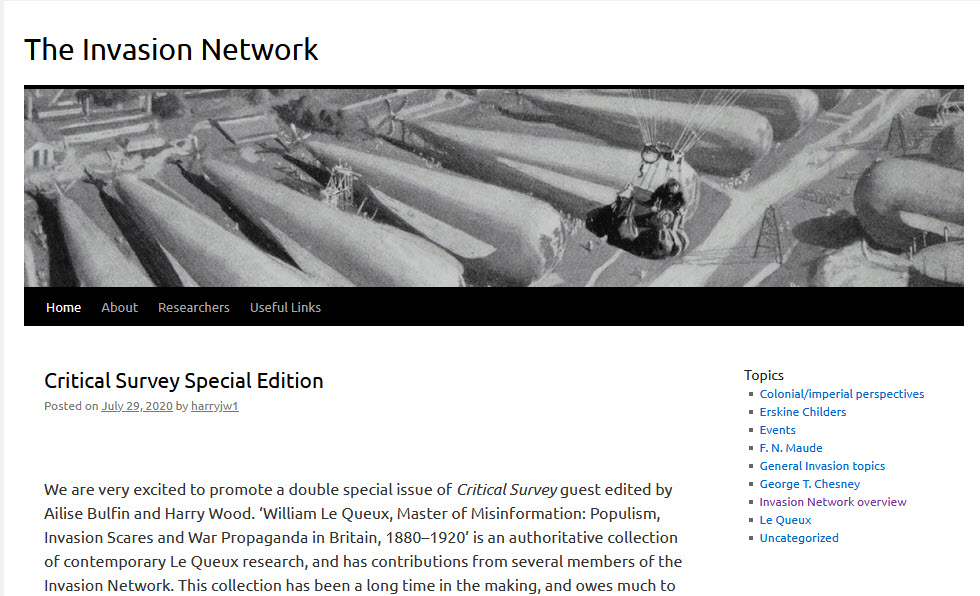 Invasion Network is a website for researches into Invasion Literature: https://invasionnetwork.wordpress.com/

The Invasion Network has been established to encourage collaboration between researchers working under the broad theme of invasion, with a particular focus on British invasion fears in the late nineteenth and early twentieth centuries.  Bringing together literary scholars, cultural historians, and a range of other specialists and independent researchers,  the network aims to further understanding of a phenomenon that, while often considered in passing, has rarely been analysed in great detail.

Emerging out of two key workshops, ‘Empire in Peril: Invasion-Scares and Popular Politics in Britain, 1890-1914 (Queen Mary University of London, November 2013) and more recently ‘Master of Misinformation: William Le Queux, Invasion Scares and Spy Fever, 1880-1930′ (Trinity College Dublin, June 2015), the network is conceived as a forum through which to develop, promote, and ultimately publish research addressing the British experience of invasion anxieties.  This includes maintaining a list of scholars working in the area, offering a platform for advertising conferences and other events, and providing a blogging space for discussion and debates.

If you would like to join The Invasion Network, or require more information, then please contact Harry Wood: harry.1.wood@kcl.ac.uk or Ailise Bulfin: bulfinam@tcd.ie