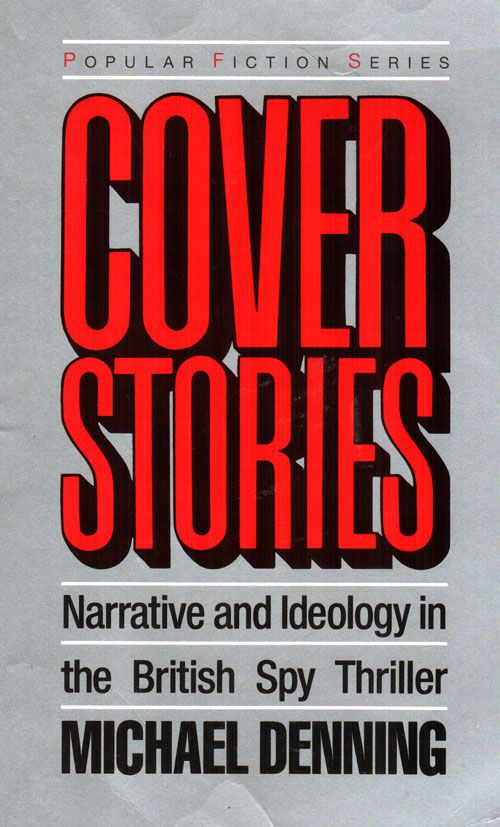 It is a habit in all of us to make our cover stories, our assumed personae, at least parallel with the reality .. , We should take the opposition’s cover stories more seriously The more identities a man has, the more they express the person they conceal Few men can resist expressing their appetites when they are making a fantasy about themselves.    – George Smiley in John Le Carré’s Tinker, Tailor, Soldier, Spy (1974)

Since the turn of the century, spy thrillers have been cover stories for our society, paralleling reality, expressing what they wish to conceal, and forming part of the imagination of the English-speaking world. In this informative and entertaining book, Michael Denning tracks the spy thriller from John Buchan to Eric Ambler, Ian Fleming and John Le Carré, and shows how these tales of spies, moles, and the secret service tell a history of our times, translating the political and cultural transformations of the twentieth century into the intrigues of a shadow world of secret agents.

Combining cultural history with narrative analysis, Cover Stories explores the two main traditions of the thriller: the thriller of work, in which the anxieties of the organization man take on a secret coherence, and bureaucratic routines are invested with political meaning; and the thriller of leisure, in which the sports and games that kill time become a killing time, a time of dangerous political contests. Examining the characteristic narrative structures of the spy novel – the adventure formulas and the plots of betrayal, disguise and doubles – Denning shows how they attempt to resolve crises and contradictions in ideologies of nation and empire, and of class and gender. Cover Stories unravels the politics of popular fiction, and illuminates the continuing fascination with spies in Anglo-American culture.   [Publisher’s Description]