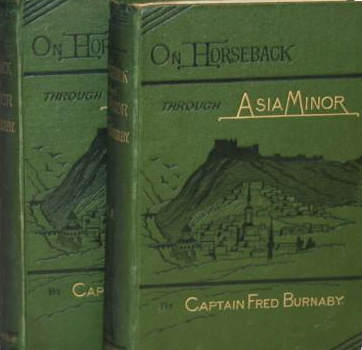 A follow-up to A Ride to Khiva.

“On Horseback Through Asia Minor” details how the brave Burnaby set off in the winter of 1876, convinced he could once again outwit the Czar’s secret police. This time Burnaby determined to ride 2,000 miles across Asia Minor undetected. Ostensibly he was going to observe the Turks away from European influences. However Burnaby needed only the barest of excuses in order to undertake one of the nineteenth century’s most courageous equestrian journeys. This book, which was published upon his return to England, details how Burnaby eluded Russian agents in Constantinople who had distributed his photo with orders to arrest him. Armed with a rifle, a small stock of medicines, and a single faithful servant, the equestrian traveler rode through a hotbed of intrigue and high adventure in wild inhospitable country, encountering Kurds, Circassians, Armenians, and Persian pashas. Through it all Burnaby succeeds in sharing with his readers all the dangers and delights of this timeless equestrian adventure travel classic!    [Classic Travel Books – http://www.classictravelbooks.com/authors/burnaby.htm]

The Spectator was less complimentary:

On Horseback Through Asia Minor, the second book which Captain Burnaby has contributed to the still accumulating mass of transient and valueless literature to which the Russo-Turkish war has given existence, is less deserving of serious consideration than was his first. [The Spectator, 15th December 1877, p.21]

Colonel Frederick Gustavus Burnaby (3 March 1842 – 17 January 1885) was an English traveller and British Army officer. Burnaby’s adventurous spirit, pioneering achievements, and swashbuckling courage earned an affection in the minds of Victorian imperial idealists. As well as travelling across Europe and Central Asia, he mastered the art of ballooning, spoke a number of foreign languages fluently, stood for parliament twice, published several books, and was admired and feted by the women of London High Society. His popularity was legendary, appearing in a number of stories and tales of empire. [Wikipedia]