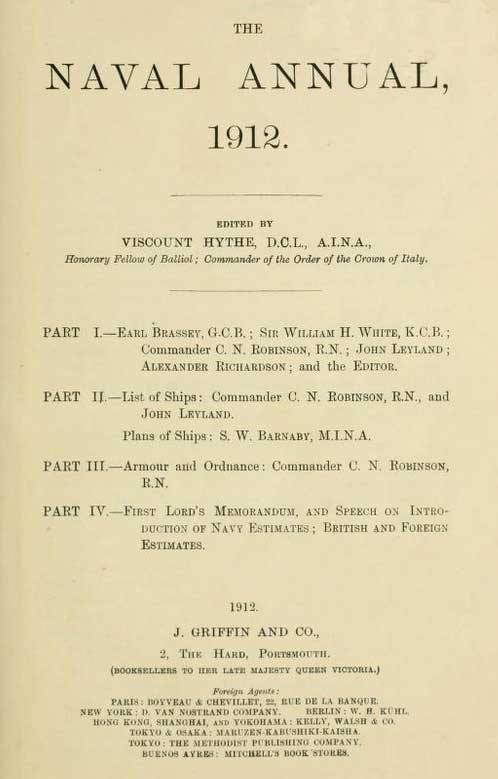 Provides a good description of the state of the world’s navies a couple of years before WW1 and also a review of expenditure, capabilities and background.

With the growth of naval preparations in almost, every country of the world. the work of preparing the Naval Annual for publication becomes heavier. The only important Power which has not increased her new construction during the year under review is the United States. Germany is adding to her naval programme; but even more noteworthy is the progress of the Navies of France and Russia. The fact that both countries have set their naval administration in better order, and are building up powerful fleets, will tend to preserve the balance of power in Europe.

The year has been one of unprecedented activity in British shipbuilding yards. A number of important ships are in hand for foreign navies. And it is interesting to note that our great private shipbuilding firms are extending the sphere of their activities. Messrs. Armstrong, Messrs. Vickers, and Messrs. John Brown & Co., are directly connected with the new construction now going forward in Spain and Russia, and the first named firm with that to be undertaken in Canada.

In his speech in the House Of Commons on March 18th, the First Lord of the Admiralty described the steps that will be taken to maintain that command of the sea which is absolutely indispensable to our national existence, and set forth the only lines on which a reduction of expenditure on naval armaments can be brought about. The determination of the Government, as expressed by the First Lord, has been received with general approval. Hardly a dissentient voice has been raised. The fact that the people of this country appreciate the importance to them of the Navy, and the growing disposition of the Oversea Dominions to assist the Motherland in the defence of the Empire against aggression, are to a Britisher the most satisfactory features in the past year.

To one point of naval policy referred to in the following pages special attention be directed.

From time to time the arguments against the growth of dimensions have been set forth in the Naval Annual. These arguments apply with special force to-day as regards the latest type of battle-cruiser, which is some 10,000 tons larger and costs from £250,000 to £500,000 more than earlier vessels of the type.