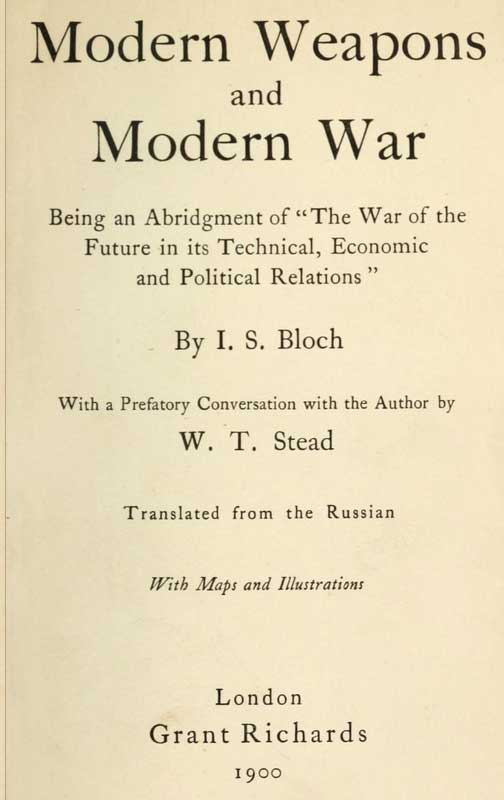 Jan Bloch (1900) Modern weapons and modern war, being an abridgment of “The war of the future in its technical, economic and political relations” translated from the Russian.

Jan Bloch’s Modern Weapons and Modern Warfare (1900) [is] the first systematic attempt to integrate a quantitative assessment of weapons technologies, statistical analysis, and measures of industrial output to predict the course Of a ‘modern’ twentieth-century war. Bloch’s conclusion was a direct, almost flawless prevision of the 1914—1918 stalemate on the Western Front: the increased lethality of weapons and the increased level of production could only result in a battlefield environment so deadly that no attacking force could survive in sufficient numbers to make a decisive breakthrough. Bloch asserted that the conflict would settle into a protracted war of attrition, in which logistical exhaustion, not battlefield defeat, would determine who lost. [Charles E. Gannon (2005) Rumors of War and Infernal Machines: Technomilitary Agendasetting in American and British Speculative Fiction, p.63]

“The Future of War” is title of M. de Bloch’s voluminous cyclopaedia on the art of war, past, present, and to come. But that is a mistake For M. Bloch’s thesis is that there is no war to come, that war indeed has already become impossible.

Hence in presenting to the English public a translation of the sixth and concluding volume of his immense book, I have taken the liberty of giving it a title which more accurately corresponds to the matter of the contents. For M. Bloch contends in all sober seriousness that war— great war in the usual acceptation of the word— has already, by the natural and normal development of the art or science of warfare, become a physical impossibility ! That is what this book was written to prove.

But, before reading the chapters crammed with statistics and entering upon the arguments of the great Polish economist, the reader may find it convenient to glance over, as a preliminary introduction to the book, the following free rendering of the conversations which I have had the privilege of enjoying with the author at St. Petersburg and in London.

M. Bloch, I may state in a parenthesis, is a well-known banker of Warsaw, who several years ago forsook finance, in which he had achieved no small success, in order to devote himself to the study of political economy, and to examine particularly the question of the future of war from a political economical standpoint. Eight years he devoted to the special study of which his work ” The Future of War ” is the monument. He published it in Russian two years ago. This year he has brought out editions in German and in French. When I met him in St. Petersburg last autumn he gave Permission to publish a translation of his book in English, in whole or in part. I have selected the last part, the sixth volume, in which he summarises the conclusions which he had arrived at in the earlier part of the book.

M. Bloch is a man of benevolent mien, of middle stature, and apparently between fifty and sixty years of age. He paid a flying visit to London in April, and is at the present moment of writing at the Grand Hotel in Paris. His home address is Warsaw. When he is in St. Petersburg he stays at the Hotel d’ Europe.

Further extracts from Bloch’s writing can be found at: http://www.cgsc.edu/carl/resources/csi/bloch/bloch.asp