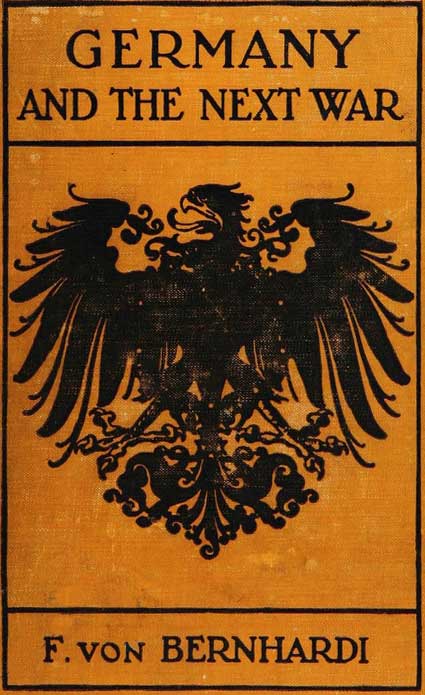 Friedrich Adolf Julius von Bernhardi (November 22, 1849 – December 11, 1930) was a Prussian general and military historian. He was one of the best-selling authors prior to World War I. A militarist, he is perhaps best known for his bellicose book Deutschland und der Nächste Krieg (Germany and the Next War), printed in 1911. He advocated a policy of ruthless aggression and complete disregard of treaties and regarded war as a “divine business”. [Wikipedia]

General Friedrich von Bernhardi’s (1849-1930) writing reflects a widespread belief among the educated, non-socialist middle classes that Germany deserved more influence and respect, in accordance with its economic power. In describing war as “the extension of politics by other means,” Bernhardi repeats the dictum of Prussian Major General Carl von Clausewitz (1780-1831). War was increasingly seen as inevitable, especially after England and France established an entente in 1905. [GHDI Volume 5. Wilhelmine Germany and the First World War, 1890-1918 The Inevitability of War: General Friedrich von Bernhardi (1912)]

All the patriotic sections of the German people were greatly excited during the summer and autumn of 1911. The conviction lay heavy on all hearts that in the settlement of the Morocco dispute no mere commercial or colonial question of minor importance was being discussed, but that the honour and future of the German nation were at stake. A deep rift had opened between the feeling of the nation and the diplomatic action of the Government. Public opinion, which was clearly in favour of asserting ourselves, did not understand the dangers of our political position, and the sacrifices which a boldly-outlined policy would have demanded. I cannot say whether the nation, which undoubtedly in an overwhelming majority would have gladly obeyed the call to arms, would have been equally ready to bear permanent and heavy burdens of taxation. Haggling about war contributions is as pronounced a characteristic of the German Reichstag in modern Berlin as it was in medieval Regensburg. These conditions have induced me to publish now the following pages, which were partly written some time ago.

Nobody can fail to see that we have reached a crisis in our national and political development. At such times it is necessary to be absolutely clear on three points: the goals to be aimed at, the difficulties to be surmounted, and the sacrifices to be made.

The task I have set myself is to discuss these matters, stripped of all diplomatic disguise, as clearly and convincingly as possible. It is obvious that this can only be done by taking a national point of view.

Our science, our literature, and the warlike achievements of our past, have made me proudly conscious of belonging to a great civilized nation which, in spite of all the weakness and mistakes of bygone days, must, and assuredly will, win a glorious future; and it is out of the fulness of my German heart that I have recorded my convictions. I believe that thus I shall most effectually rouse the national feeling in my readers’ hearts, and strengthen the national purpose.

More from Bernhardi: [GHDI – as previous]

If we look [ . . . ] at the position of Germandom in the world, we must admit with a bleeding heart that the political position of the German Reich in no way corresponds to the cultural worth of the German people and the economic importance of Germandom abroad. [ . . . ]If we are thus in a less favorable situation as a continental power, our position in the world is threatened to the same degree; indeed, it is still impossible to speak of the German Reich as having a genuine world standing as such. Even though the economic importance of Germandom has become quite significant all over the world (under the umbrella of the political respect that our wars of unification have won for us), we are still not able to assert ourselves as a world power anywhere, and there are but few places on the earth where Germandom can develop freely and independently, namely in the few colonies that we acquired back then with England’s consent and still possess today.

This colonial possession, however, does not correspond in any way to our importance as a people of culture, nor to our economic needs, nor to the numerical size and developmental potential of our people. Moreover, given the way political power is distributed today, relations with our overseas possessions could be cut at any time and we would be incapable of defending ourselves against it. If, by contrast, we examine the colonial empires of England, France, and even small Belgium, we recognize clearly that we were shortchanged when the world was divided up, not without our own grievous fault. [ . . . ]

War is the extension of politics by other means and at the same time the most effective, if most dangerous, instrument of politics. Indeed, it even has to be said that the possibility of war as an extreme measure is a necessary precondition of politics. One cannot conceive of politics at all without the possibility of invoking arms under certain circumstances. Between states that cannot accomplish a peaceful accommodation of clashing interests, there is, in fact, no other measure of power than war, and merely imagining the detrimental consequences of war would bring a state to relinquish part of its most precious interests in favor of an adversary.
[ . . . ]

It is also imperative to reclaim for war its moral justification and political importance in public opinion. Its great significance as the mightiest promoter of civilization must be generally recognized in accordance with its worth. We must come to understand that in a genuinely cultured nation, economic and personal interests alone must never be allowed to be the only ones; that it is not the external but the moral goods that are the true cultured goods worth striving for, and that making sacrifices and enduring suffering in the interest of a great cause elevates man more than does the enjoyment and greedy pursuit of the sensual goods of this world; in short, that war for idealistic purposes or for the self-affirmation of a noble people should be described not as barbarism, but as the highest expression of true culture, and as a political necessity in the interest of biological, social, and moral progress. [ . . . ]

In these results, however, lies the biological importance of war for the progressive development of mankind; for it is clear that the forces that bestow superiority in warfare, namely above all the spiritual and moral ones, of the kind that flourish only in a vital people, are at the same time those that make possible a progressive development of culture. It is precisely because they contain within themselves the elements of progress that they grant victory, which expands the vital people and creates more favorable living conditions and enhanced influence. Without war, however, it would be all too easy for the inferior and degenerate races to overpower the healthy, germinative elements through sheer size and the power of capital, and a general decline would be the inevitable outcome. In selection lies the creative power of war. Because it and it alone brings this about, it becomes a biological necessity, a regulator in the life of mankind, which cannot be dispensed with, because without it the result would be an unhealthy development that would rule out any advancement of the species and thus also all genuine culture.