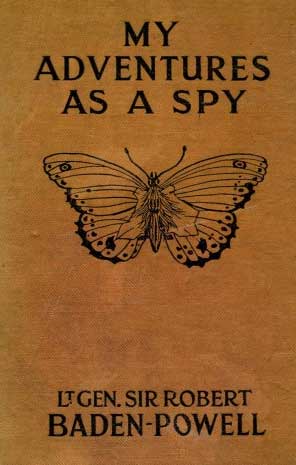 In this entertaining little volume of reminiscences Sir Robert Baden-Powell joyfully accepts the title of spy, and he thus does something to remove the absurd discredit attaching to a title which is too loosely used. The process of finding out information about the enemy while one is dressed in civil clothes is called “spying”; the exactly similar process when one is dressed in uniform is called “reconnoitring” or “scouting.” By all logic the two processes are equally honourable. In fact the spy accepts the greater risks, for in war his life is forfeit if he is captured, yet when this happens he is looked down upon as a “despicable spy.” “I don’t,” says General Baden-Powell, “see the justice of it myself.” We don’t either. A large part of the work of the Intelligence Department is of coulee simply “spying,” and very difficult work it is, requiring coolness, daring, and resource. Even in peace time if the spy is caught he cannot expect to have a word said on his behalf by his Government. The terms of his employment require him to accept the consequences. It is true that in peace time he will not be shot, but he may quite easily find himself condemned to several years’ imprisonment fora trivial offence. The only case in which odium justly belongs to a spy is when he is treacherous or venal—when he spies upon his own land and his own people in order to sell the information to an enemy, or when he betrays the hospitality of the foreign country in which he lives. Other spying is simply what General Baden-Powell aptly calls “reconnaissance in disguise.” [Spectator, 27 March 1915]

There is a discussion of Baden-Powell’s use of entomological drawings to conceal plans at Public Domain Review.