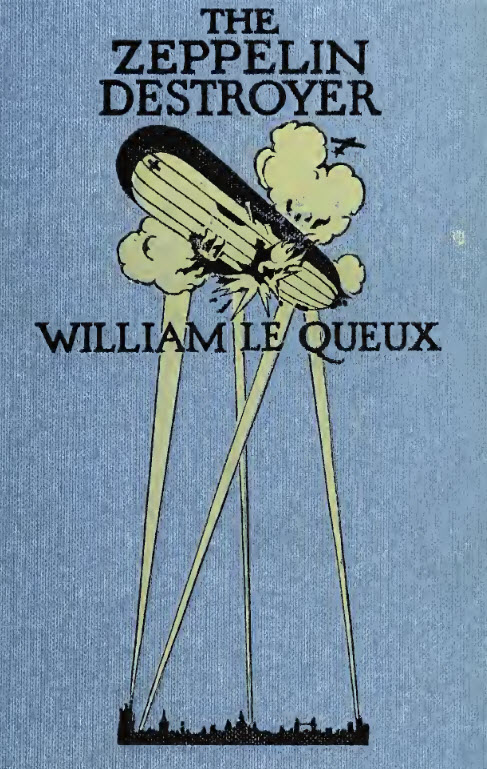 William Le Queux (1916) The Zeppelin Destroyer – Being Some Chapters of Secret History, London, Hodder and Stoughton

……….. Then, as was my habit, I went on to the Royal Automobile Club in Pall Mall, and, after my meal, sat in the window of the big smoking-room chatting with three of the boys—airmen all of them.

George Selwyn, a well-known expert on aircraft and editor of an aircraft journal, had been discussing an article in that morning’s paper on the future of the airship.

“I contend,” he said firmly, “that big airships are quite as necessary to us as they are to Germany. We should have ships of the Zeppelin and Schutte-Lanz class. The value of big airships as weapons of defence cannot be under-estimated. If we had big airships it is certain that Zeppelin raids—more of which are expected, it seems—would not be unopposed, and, further, we should be able to retaliate. We’ve got the men, but we haven’t got the airships—worse luck! The Invisible Hand of Germany has deceived us finely!”

“That’s so,” I chimed in. “The Germans can always soothe their own people by saying that, however dear food is and all that, yet they can’t be strafed from above—as we unfortunately are.”

“I quite agree,” declared Charlie Digby, a well-known pilot, and holder of a height-record. A tall, clean-shaven, clean-limbed fellow he was lying back in the deep leather armchair with his coffee at his side. “But is it not equally true that, if we had aeroplanes of the right construction and enough of them, we could give the night-raiders in Zeppelins a very uncomfortable time?”

“Quite so. I’m all in favour of suitable aeroplanes,” Selwyn admitted. “We must upset this Zeppelin menace by some means or other. Here we are—the greatest and most powerful nation the world has ever seen, worried three times a month by the threat of these German gas-bags! It is quite possible to obtain such aeroplanes as would enable us to fight the Zepps. As somebody wrote in the paper the other day regarding the future range of the naval big guns, it is useless to send up half-trained quirks on soggy seaplanes accompanied by still less trained spotting officers equipped with short-range wireless which cannot receive. The gun-spotter in a Fleet action should be a fully trained and experienced gunnery-Jack, seated in a comfortable observation-car where charts and navigating instruments can be used with accuracy. Therefore, if we can’t get the proper aeroplanes, we must have airships for the purpose, as they are at present the only apparent vehicle for scientific gunnery in a Fleet action.”

With this we all agreed.

“Another point,” I said, “was advanced by a clever writer in the Aeroplane the other day. It was pointed out that in the matter of fighting Zeppelins, however good aeroplane patrols may be, they must depend on their eyes to find enemy airships. One may silence engines, but one cannot silence air, and, though one may shut off and glide slowly, yet there will always be enough whistling of wind round wires and struts to wash out any noise of airship engines, gears, and propellers, unless they are very close indeed. An airship, on the other hand, can shut off and float. There may be some creaking of the girders, and stays, but there will be no continuous whistling. Therefore an airship makes a perfect listening-post for enemy aircraft of all kinds.”

“I’m quite sure of that,” declared Charlie Digby from the depths of his chair. “If we are to win the war we must fight the Zeppelin. We want a real good man at the head of affairs and we should allow him a free hand, and put a stop to the endless committees and conferences and confabulations which have been the curse of this country in every department since war began—and before. Let that man have the advice of all the specialists he may require, and let him encourage people with ideas to offer their advice, instead of turning them down, as is the custom of most people in commanding positions.”

Those same sentiments I had read in one of the papers that very day.

I said nothing more. It was time for me to be off, so I rose and left, having an appointment with Teddy Ashton.

As I passed through the big hall of the club I reflected how true were Digby’s words. If we were to win the war we must fight the Zeppelins effectively.

That same question had occupied the minds of both Teddy and myself for many months, long indeed before the first Zeppelin had crossed the North Sea. Both of us had realised the deadly peril of those huge murder-machines against which we would be utterly powerless.

During the first year of war the public had laughed at the idea of Zeppelins coming over to drop bombs on undefended towns, or making an air raid upon London. The popular reply to anyone who ventured to express fear of such a thing as had been openly threatened in the German Press was: “Bah! they haven’t come yet!”

But at last they had come, and they had dropped bombs upon inoffensive citizens. There were some writers already crying, “Never mind the Zeppelins!” In the sluggish apathy which refused to worry as to the state of our air-defences they discovered a sort of heroism! “Surely,” they exclaimed, “civilians, including women and children, ought to be really glad and proud to share the risks of their sons or brothers in the trenches.”