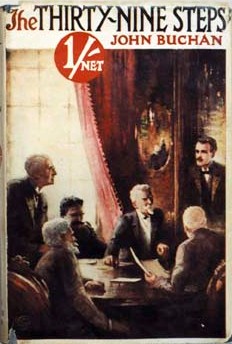 Although published in 1915 Buchan started writing the story in August 1914 while convalescing and it is set prior to the First World War. It can be considered as a cross between an adventure story, a detective novel and a spy story, but Richard Hannay, the main protagonist, is seen as the precursor of the gentleman adventurer / spy.

Geoffrey Powell, in a 1985 article in History Today, states that “The undercover spying mission of a British officer disguised as a Boer in German South-West Africa provided John Buchan with inspiration for his most famous character”. (History Today, Vol 37 Issue 8)

John Buchan wrote The Thirty-Nine Steps while he was ill in bed with a duodenal ulcer, an illness which remained with him all his life. The novel was his first “shocker”, as he called it — a story combining personal and political dramas. The novel marked a turning point in Buchan’s literary career and introduced his famous adventuring hero, Richard Hannay. He described a “shocker” as an adventure where the events in the story are unlikely and the reader is only just able to believe that they really happened. Buchan’s son, William, later wrote that the name of the book originated when the author’s daughter was counting the stairs at a private nursing home in Broadstairs, where Buchan was convalescing. “There was a wooden staircase leading down to the beach. My sister, who was about six, and who had just learnt to count properly, went down them and gleefully announced: there are 39 steps.” Some time later the house was demolished and a section of the stairs, complete with a brass plaque, was sent to Buchan. The mysterious phrase Thirty-Nine Steps, first mentioned by the character Franklin Scudder, becomes the title of the novel and the solution to its meaning is a thread that runs through the whole story.

The novel is set during May and June 1914; Europe is close to war and spies are everywhere. Richard Hannay the protagonist and narrator, an expatriate Scot, returns to his new home, a flat in London, after a long stay in Rhodesia, in order to begin a new life. One night he is buttonholed by a stranger, a well-travelled American, who claims to be in fear for his life. The man appears to know of an anarchist plot to destabilise Europe, beginning with a plan to assassinate the Greek Premier, Karolides, during his forthcoming visit to London. The man reveals his name to be Franklin P. Scudder, a freelance spy, and remarks that he is dead, which holds Hannay’s attention. Scudder explains that he has faked his own death in order to avert suspicion. Scudder claims to be following a ring of German spies called the Black Stone who are trying to steal British plans for the outbreak of war. Hannay lets Scudder hide in his flat, and sure enough the next day another man is discovered having apparently committed suicide in the same building. Four days later Hannay returns home to find Scudder dead with a knife through his heart.

There is a detailed analysis of The Thirty-Nine Steps in David Stafford’s 1983 paper: John Buchan’s tales of espionage: a popular archive of British history, Canadian Journal of History, Vol. 18, Issue 1