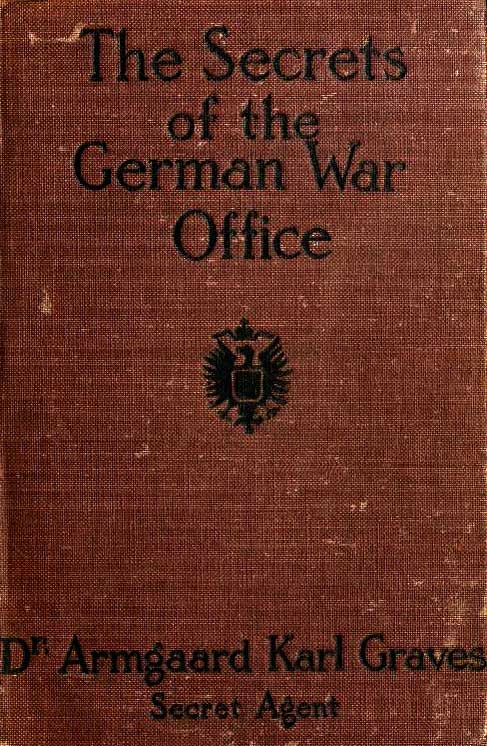 Purported to be a true story it reads more like an imaginative attempt to capitalise upon spy fever.  [see contemporary review]

The average man or woman has only a hazy idea what European Secret Service and Espionage really means and accomplishes. Short stories and novels, written in a background of diplomacy and secret agents, have given the public vague impressions about the world of spies. But this is the first real unvarnished account of the system; the class of men and women employed; the means used to obtain the desired results and the risks run by those connected with this service. Since the days of Moses who employed spies in Canaan, to Napoleon Bonaparte, who inaugurated the first thorough system of political espionage, potentates, powerful ministers and heads of departments have found it necessary to obtain early and correct information other than through the usual official channels. To gain this knowledge they have to employ persons unknown and unrecognized in official circles. A recognized official such as an ambassador or a secretary of legation, envoys plenipotentiary and consuls, would not be able to gain the information sought, as naturally everybody is on their guard against them. Moreover, official etiquette prevents an ambassador or consul from acting in such a capacity.

In this age of rapid developments the need of quick and accurate information is even more pressing. Europe to−day is a sort of armed camp, composed of a number of nations of fairly equal strength, in which the units are more or less afraid of each other. Mutual distrust and conflicting interests compel Germany, England, France and Russia to spend billions of money each year on armaments. Germany builds one battleship; England lays down two; France adds ten battalions to her army; Germany adds twenty. So the relative strength keeps on a fair level. But with rapid constructions, new inventions of weapons, armor, aerial craft, this apparent equality is constantly disturbed. Here also enters the personal policy and ambitions and pet schemes of the individual heads of nations and their cabinets. Because there is a constant fear of being outdistanced, every government in Europe is trying its utmost to get ahead of the other. They, hence, keep a stringent watch on each other’s movements. This is possible only by an efficient system of espionage, by trained men and women, willing to run the risks attached to this sort of work.
For risks there are. I have been imprisoned twice, once in the Balkans at Belgrade, once in England. I have been attacked five times and bear the marks of the wounds to this day. Escapes I have had by the dozen. All my missions were not successes, more often, failures, and the failures are often fatal.