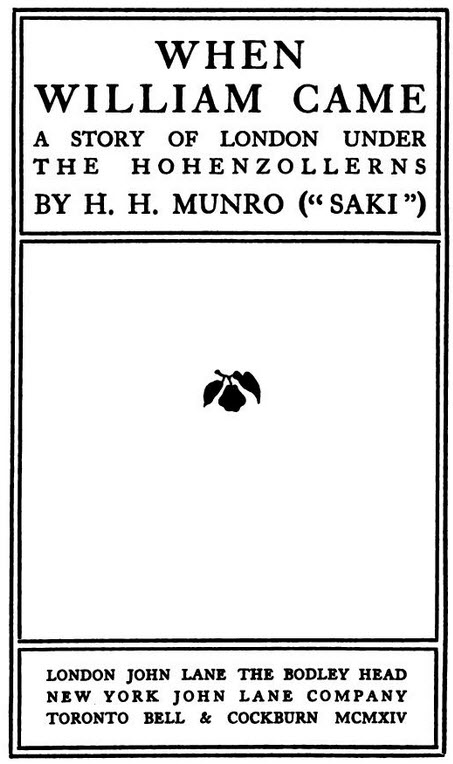 When William Came: A Story of London Under the Hohenzollerns is a novel written by British author Saki (the pseudonym of Hector Hugh Munro) and published in 1913. It is set several years in what was then the future, after a war between Germany and Great Britain from which Germany emerged victorious. The “William” of the title is Kaiser Wilhelm II, who came from the House of Hohenzollern, hence the subtitle. The book chronicles life in London under German occupation, and the changes that come with a foreign army’s invasion and triumph. Like Robert Erskine Childers’s 1903 novel The Riddle of the Sands, it predicts World War I (in which Saki would be killed) and is an example of invasion literature, a literary genre which flourished at the beginning of the 20th century as tensions between European nations increased.

Much of the book is an argument for compulsory military service, about which there was then a major controversy. The scene in which an Imperial Rescript is announced in a subjugated London, excusing the unmilitary British from serving in the Kaiser’s armies, is particularly bitter. There are also several vignettes exemplifying the differences between the English and continental systems of law: for example, the moment when the hero’s hostess informs him that she must register his presence under her roof with the police, and the incident in which he is fined on the spot for walking on the grass in Hyde Park. In another episode, he finds himself unintentionally but unavoidably fraternising with one of the invaders. (Description from Wikipedia)

The text is available here: When William Came