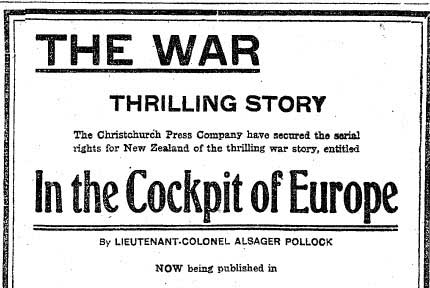 Lieutenant-Colonel Alsager Pollock (1913) In the Cockpit of Europe. Smith, Elder, and Co.

In a preface to In the Cockpit of Europe (SMITH, ELDER) Lieut.-Colonel ALSAGER POLLOCK states that “the personal experiences of George Blagdon, in love and war, have been introduced solely in the hope of inducing some of my countrymen to read what I have to say about other important matters”–an ingenuous confession which deprives my sails of most of their wind. Otherwise I should have said that this book is not so much a novel as an airing-ground for grievances, adding for fairness that these grievances are national and not personal. A terrific war with Germany gives Blagdon opportunity to win various distinctions, and Marjory Corfe affords him ample justification for falling in love; but although I grant, even in the face of that preface, that Blagdon is not completely a puppet, he is used mainly to emphasize his creator’s ideas. Officials at the War Office who read In the Cockpit of Europe may possibly require some artificial aids to digestion before they have finished it, but both they and the Parliamentary and Ministerial strategists will have to admit that their critic’s honesty of purpose is beyond all manner of doubt. [Punch, or the London Charivari, Vol. 146, February 4, 1914]

THE INTERDEPENDENCE OF OUR NAVY AND ARMY

IT is simply the most essential of verities that never in the course of England’s history hag the country had better reason to maintain the principle of the balance of power the one infallible pole-star by which to steer the Empire’s policy.” This statement of plain fact will have been understood and accepted by many who read it in a leading article published in the Outlook of December 14; but there are, most unhappily, far larger numbers who cannot or will not open their eyes to the truth, and who, if they trouble themselves at all to think seriously of National Defence, habitually persuade themselves that only naval strength is indispensable.

The doctrine of the Navy first ” is perfectly sound, but it is equally true that the Navy is very largely dependent upon the Army for the maintenance of conditions in which it can enjoy the preponderance necessary for the effective performance of its protective functions. This ig a fact that is rather generally overlooked, although it is clear that the balance of power rests on a military, not on a naval pivot, and that we therefore need an active army strong enough and good enough to prevent the balance from being seriously disturbed. Moreover, in order to maintain public confidence, so that the Navy the active Army may be freely employed, we need also a Home Defence Army fully adequate in point of numbers and of training to fulfil the required purpose. Such a force we have not at present, because our politicians will not adopt the measures requisite to fill its ranks and to render it battleworthy. For myself, I have no sympathy with those who would, in existing conditions, hold back the Expeditionary Force for any reasons naval or military. Boldness does not necessarily mean rashness, nor is caution invariably synonymous with discretion. It is wiser to accept even considerable risks than the certain destruction that would eventually be the penalty of timidity ; but it is also imperative that no useful precaution should avoidably be omitted.