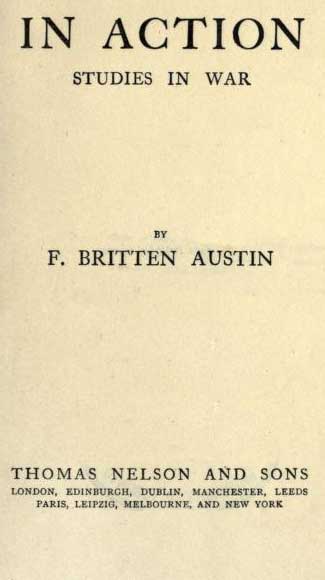 This short story explores the impact of aeroplanes upon warfare especially on conventional troops.

While many writers anticipated conflict between England and Germany, few envisioned the full scale of the war or all of the consequences, and many predictions relied too much on past precedents of less technologically-driven conflicts. Still, some futuristic visions did dream big, like the colorfully illustrated 1908 French serial La Guerre Infernale, which anticipated the second World War more than the first with its massive scale and outlandish weaponry, and H. G. Wells’ 1897 The War of the Worlds, which imagined the impact of unimaginably powerful alien war machines. Additionally, some authors wrote on a less global (or interplanetary) scale but still predicted the game-changing role of technology; for example, the devastating potential of airplanes envisioned in ‘Planes! by Frederick Britten Austin, or the submarine warfare described in Danger! by Sir Arthur Conan Doyle (1914). [WW1 Online – Imagined Wars: Envisioning the War to Come]