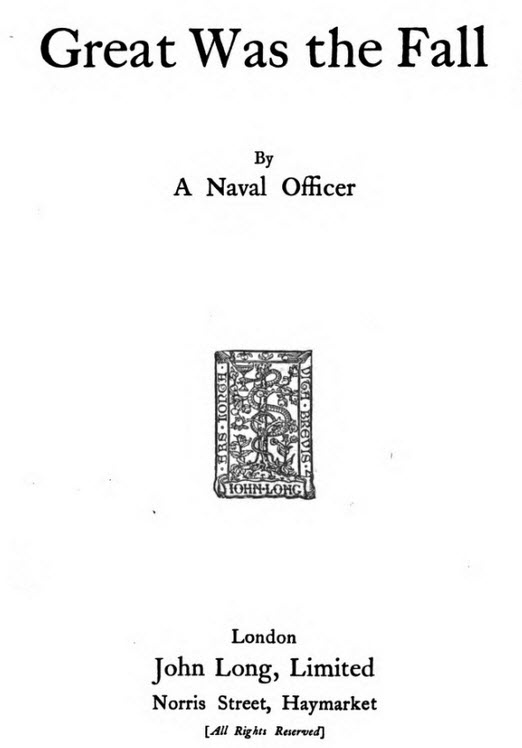 An invasion by Germany on an unprepared Britain.

Cautionary novel of the Battle of Dorking sort, with full novelistic treatment. The basic point of view is politically conservative grousing at British Naval unpreparedness due to false economy and ‘misdirection’ of government funds to programs for social improvement. [Everett Franklin Bleiler, Richard Bleiler (1990) Science-fiction, the Early Years]

THIS book is dedicated to the British public, who know dangerously little about the Navy. It is written with no desire to create a scare, but in the hope that a full appreciation may be made of the vicissitudes to which warships are exposed.

By an unfortunate concatenation of circumstances, it might so arise that we found ourselves, temporarily, but barely superior at sea to a hostile power. With the advantage of a surprise attack—and who can say such action is impossible superiority might become inferiority.

Surely from a business point of view, it behoves the nation to spend enough on the assurance of its existence. Is it not better to create a fleet, perhaps even unnecessarily large, but one which leaves no loophole for the element of chance to play a part, and the size of which might act as a deterrent to the increase of naval expansion by other powers?

I plead for the flotation of a naval loan to put the issue beyond all doubt.

The general public may not know that during the last summer, at the time of strained relations between ourselves and another Power, that Power’s destroyer flotillas were patrolling fifteen miles outside the

unfortified harbour of Cromarty, at night time. Within that harbour the Home meet lay. Between it and possibly partial destruction stood our own destroyers—working close outside the harbour’s mouth—and the guns and torpedo nets of our battleships themselves. Is this the position in which we should find ourselves on what might at any moment have been the outbreak of hostilities Evidently the admiral in command of the Home Fleet thought not ; for, in accordance with orders to take steps to prepare for all eventualities and to safeguard against all risks, he asked permission from the Admiralty to take his fleet to sea. The request was refused on the grounds that it might be construed as a warlike action!

Must, then, such considerations, by the omission to carry out necassary strategical movements, lead us to actually imperil our fleets?

The British vessels I have named in this book are those actually likely to be commissioned and in service in August, 1918.

As regards German men-of-war, the completion of the three battleships “Weissenburg,” “Wilhelm,” And “S”—officially given as taking place in 1914— has been antedated some months.

The ships were, however, laid down in the early part of 1911, and the Germans, if they wish, can, and have built and completed warships every bit as rapidly as ourselves.

I too strongly urge that the Admiralty “warship construction ” returns, based on information of paid and unpaid secret agents, is frequently wrong, and that any ship-building programme of ours, framed on problematical dates for the commissioning of new units for our maritime rival’s fleet, is a dangerous and, at times, perilously insecure one.