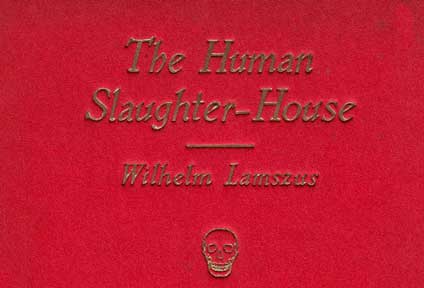 Wilhelm Lamszus (1912) The human slaughter-house. Scenes from the war that is sure to come. From the German, translated by Oakley Williams (1913).

A horrific, realistic vision of the war to come.

The pacifists of the early part of the last century often emphasized the horrors of war. In these latter days we have been stressing the importance of courts and arbitrations as the rational substitute for war. Prof. Wilhelm Lamszus, a German public schoolmaster, has gone back to first principles and given to us in his “Menschenschlachthaus” a most expert and convincing picture of a modern war. In this little book one finds revealed the automatic, mechanical, blind heartlessness of the soldier’s sacrifice—no longer the “honorable soldier’s death,” but the death by “experts,” bv “mechanicians,” by “machinery.” In these few pages the artist paints for us with the realization of a Zola the blood-red madness of battle, the big, glazed eyes and clawing fingers of death. We are shown with a few master strokes how our boasted civilization turns its Christ into a wooden puppet, and for its patron saint enthrones in His place the fiery Djengis Khan. It is not surprising that this book has reached a sale of 100,000 copies in Germany; that it is being translated into eight foreign languages. We readily understand why the author was removed from his official position by the government, and, encouraging fact, that he was reinstated because of the weight of public opinion. Any reader of this book will understand why the author received a vote of thanks from the Nineteenth Universal Peace Congress at Geneva. [The Human Slaughter-House by Wilhelm Lamszus; Oakley Williams; Alfred Noyes The Advocate of Peace (1894-1920), Vol. 75, No. 6 (JUNE, 1913), p. 140]

There is one thing that will certainly be said about this book by some of its readers. It will certainly be said to exaggerate the horrors of modern war; and, just as certainly, that is a thing which this book does not do. It is appallingly reticent; and, for every touch of horror in its pages, the actual records of recent warfare could supply an obscure and blood-stained mass of detail which, if it were once laid before the public, would put an end to militarism in a year. It is not the opponents of militarism who are given over to “cant” and “hypocrisy” and “emotionalism.” It is the supporters of militarism who on the eve of a great war go about crying for suppression of facts, censorship of the facts not only of military plans, but of human suffering. For if there is one thing that the military journalist dreads it is the sight and smell of blood. “Let us enjoy this pleasant compaign. Let us present our readers with a little military music played upon the brass bands of the press. But for God’s sake do not waft over Europe the smell of iodoform, or of the slaughter-house. Man is a fighting animal; let us enjoy the fight. And—pollice verso!”

Unfortunately for these gentlemen, whose good taste is so impeccable that they shrink from the whole truth, man is also a fighting god. ‘And the next thing we are going to fight is militarism. There is hardly a great commander in the history of modern warfare who has not described his own profession as “a dirty trade” and war itself as hell. The party of “bad taste” which is going to destroy militarism is not likely to reject the testimony of Wellington, Grant and Napier in favor of the sensational journalist. This book deals chiefly with the physical and mental horrors of war. It presents just that one side of the case; but it must not be forgotten that there are vast battalions of logic and common sense on the same side. From a logical point of view a war between civilized peoples is as insane as it is foul and evil. The pacificists are fighting the noblest battle of the present day. They are not going to win without a struggle; but they will win. And they will win because they have on their side the common good of mankind, common sense, common justice, and common truth.