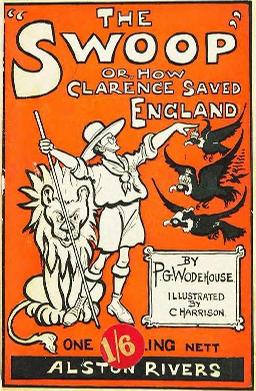 The Swoop! or How Clarence Saved England, by P. G. Wodehouse

A comic short novel satirizing the genre of invasion literature.

The Swoop!, or How Clarence Saved England is a short comic novel by P. G. Wodehouse, first published in the United Kingdom by Alston Rivers Ltd, London, on April 16, 1909. Its subtitle is A Tale of the Great Invasion. An adapted and much abbreviated version, set in the United States, appeared in the July and August 1915 issues of Vanity Fair under the title The Military Invasion of America and with the subtitle A Remarkable Tale of the German-Japanese Invasion of 1916. The original story was not published in the United States until 1979, four years after Wodehouse’s death, when it was included in the collection The Swoop! and Other Stories. [Wikipedia]