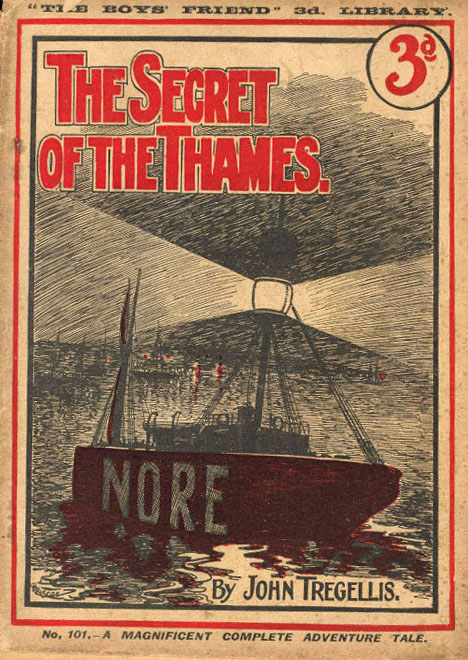 John Tregellis (1909) The Secret of the Thames – The Boys’ Friend

The only description I can find at present comes from Friends of the Dorothy Neal White Collection:

In John Tregellis’s ‘The Secret of the Thames’, invasion of Britain across the North Sea is again a focus. The hero of the piece, Hervey Milton, is an amateur sailor and employee of the War Office. The story opens with Hervey tackling a difficult entrance to the mouth of the Thames. He explains to his comrade that the Thames estuary holds notorious sands and banks that are mostly undetectable, even in daylight. Having succeeded, he moors his yacht and arrives at the War Office where he is asked his advice on the Thames’ defences….During his mission Hervey uncovers a sinister German plot to invade Britain across the North Sea, but instead of using the cream of the High Seas Fleet, they plan to use lighters, flat-bottomed barges intended for transporting goods. On discovering this Hervey rushes back to the War Office to report on this fiendish but highly effective plot to circumvent the Royal Navy ……  Despite Hervey’s protestations the invasion eventuates in the manner foretold with 120,000 foot and guns descending on the Kent coast, delivered there courtesy of the lighters. Newspaper headlines state: GERMAN FORCE INVADES KENT! BATTLE RAGING! The gravity of the situation hits home with England’s south coast being assailed for the first time in centuries.