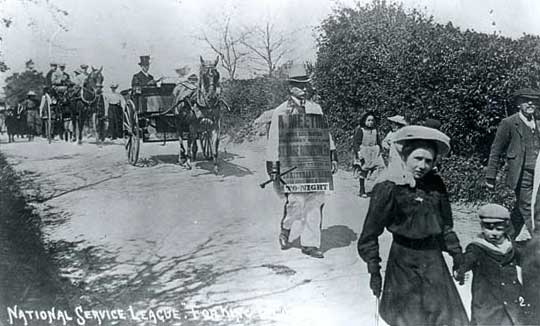 A play produced on behalf of the National Service League as a counter to An Englishman’s Home.

The play and its background is described in Harry Woods article: Representations of compulsory military service in Edwardian Invasion-scare fiction 1899-1914

The new play, “A Nation in  Arms” by Mr. B. S. Townroe, which has for its object the National Service League idea of the danger the country is running by relying on the Territorial forces, was produced at the Warrington Theatre last night. There was a crowded and fashionable audience, including many military people.

The cast was filled by most capable artistes, and the play, being full of dramatic interest, was a distinct success. It is a novelty to see England in the hands of a triumphant enemy as the result of a successful invasion, and the audience was wonderfully sympathetic in the face of national disaster.

Mr. Townroe, in answer to enthusiastic calls from all parts of the house, came forward and was the object of great ovation. He asked his audience to forgive him for not providing them with a happy ending. He and his friends, however, did not mean to mince their meaning. They had seen in the play that night what we might see in real earnest before many years. He hoped that all might rise up and show by personal efforts that we intended to prevent war coming to dear old England.

“A NATION IN ARMS” AT THE SAVOY THEATRE.

Yesterday’s performance by Miss Flora Campbell-Patterson’s Company of Mr. B. S. Townroe’s play Nation in Arms was marked by a considerable amount of patriotism in various parts of the Savoy Theatre. There was stage patriotism on the stage, patriotic tunes and brazen instruments of music in the orchestra, patriotism rather languidly applauding with kid gloves in the stalls, and shrill-voiced, eager-eyed Boy Scout patriotism in the gallery. And in one of the boxes there was Lord Roberts, the soldierly field-marshal who would fain see the manhood of this country prove that there is something real in its talk of patriotism by the testimony of personal service.

Mr. Townroe’s play is frankly propagandist. The interesting fact, about it is that it was written with the design Of attracting the men of Lancashire and Yorkshire to the subject, of universal service, and that it so far succeeded in its mission that they are now far more interested in the question of their share in the defence of their country than used to be the case. Apparently they like their patriotism flavoured with melodrama and comic relief, some of which has the effect of making the experience of a foreign invasion and the conquest of England appear a less terrible affair than it would be in reality. But the Boy Scouts at all events followed the play, in spite of its limitations, with the heartiest enthusiasm. They were a model gallery audience, and cheered every reference to the soldierly duties of the true patriot to the echo. Beyond them there were unfortunately not many possible defenders of the country in the house, so that no great accession to the strength of the Territorials is to be expected as the result of the performance. But, whenever it could count upon a more masculine audience the play might doubtless do useful recruiting work.