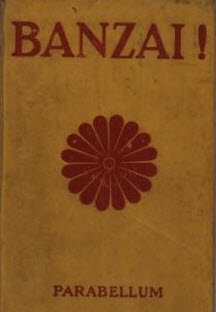 Published in Berlin in 1908 and published in English translation in 1909 it relates to a Japanese attack on the American fleet.

FOREWORD
Every American familiar with the modern international political horizon must have experienced a feeling of solid satisfaction at the news that a formidable American fleet was to be dispatched to the waters of the Pacific, and the cruise of our warships has been followed with intense interest by every loyal citizen of our Republic. The reasons that rendered the long and dramatic voyage of our fleet most opportune are identical with the motives that actuated the publication of this translation from the German of a work which exhibits a remarkable grasp of facts coupled with a marvelously vivid power of description. It is no secret that our ships were sent to the Pacific to minimize the danger of a conflict with our great commercial rival in the Far East, if not to avert it altogether, and Banzai! it seems to me, should perform a similar mission. The graphic recital, I take it, is not intended to incite a feeling of animosity between two nations which have every reason to maintain friendly relations, but rather to call the attention of the American people to the present woeful lack of preparedness, and at the same time to assist in developing a spirit of sound patriotism that prefers silent action to blatant braggadocio. That the Pacific Ocean may become, in truth, the Peaceful Ocean, and never resound to the clash of American arms, is the devout wish of one who believes—implicitly—with Moltke in the old proverb, Si vis pacem, para bellum—If you wish for Peace, prepare for War.