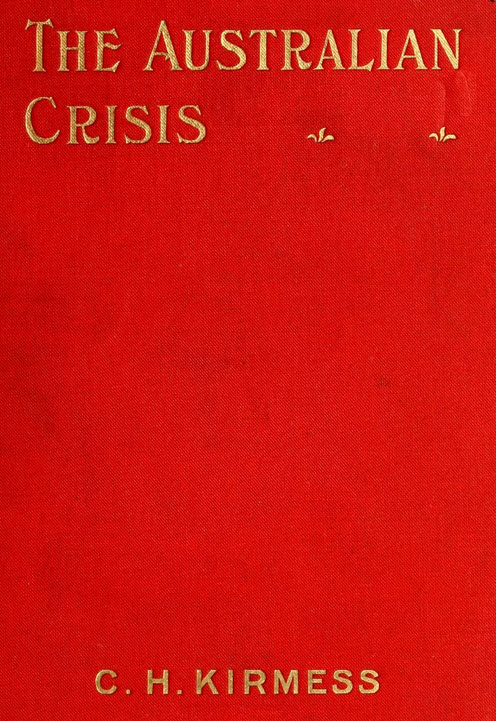 “From the 1880s to the first World War, the fear of an Asian invasion, whether migratory or military, was a major theme in Australian literature as it was in Australian politics. It excited the imagination of utopian socialists, bush balladeers and radical reformers, and was a central, if misunderstood, motif in the ‘Legend of the Nineties’ which strove to define a ‘National Culture.’
This literary preoccupation, which amounted almost to an obsession, expressed itself through cartoons, short stories, plays, films, and most substantially of all, novels. Of the latter the three most important were ‘White or Yellow? A Story of the Race War of A.D. 1908‘, written by William Lane under the pseudonym of ‘The Sketcher’, which appeared in the Brisbane weekly the Boomerang from 18 February to 5 May 1888; The Yellow Wave: A Romance of the Asiatic Invasion of Australia by Kenneth Mackay, which was published in 1895; and The Australian Crisis by C.H Kirmess (Frank Fox?), which came out first as a serial entitled Commonwealth Crisis in the Sydney journal the Lone Hand between October 1908 and August 1909, and was turned into a book in 1909 under the more nationalistic title.” [Australia and the Wider World: Selected Essays of Neville Meaney ,(2013) edited by James Curran and Stuart Ward, pp.73-74]

In The Australian Crisis, Japan secretly landed soldier-settlers on the unpopulated coasts of the Northern Territory. After learning Of the Japanese incursions, the Australian government appealed to the British for diplomatic and naval support in bringing about the removal of the alien intruders. The British, caught up in a web Of European troubles and tensions, were unable to send a fleet to the Far East for they realized that after the despatch of such a force, the Royal Navy would not be Strong enough ‘to guarantee the safety of the heart of the Empire against the ambitions of European rivals’. Consequently they urged the Commonwealth to pursue a policy of caution and compromise in treating With the Japanese. The Australians then for the first time understood that their faith in ‘the Supremacy of the British Navy which had justified their shocking neglect of the first principles of defence ‘had been misplaced. [Neville Kingsley Meaney, The search for security in the Pacific, 1901-14]

“THE AUSTRALIAN CRISIS” is the final result of an attempt on my part, early in 1907, to write a magazine article dealing with the dangers to which the neighbourhood of overcrowded Asia exposes the thinly populated Commonwealth of Australia. At that time, my thoughts on the subject resembled those of the Australian multitude: they were disconnected, and more in the shape of a vague fear than defined clearly. However, when I began to work out my problem, I soon recognized that it was too vast for intelligible compression within the limits of an ordinary magazine contribution. I was quite convinced of this when the central idea of the book occurred to me–the possibility of a coloured invasion of Australian territory, organized on such lines that the Australians would be unable to persuade the heart of the Empire that there was any invasion.

This central idea may be termed my only presupposition, for which reason I have been at pains to treat it from every point of view. Granted its feasibility, the whole narrative of Parts I and III follows as a matter of cold, logical necessity. True, the details might vary, but the drift of events would be inevitable in the direction indicated. Part II is an interlude, which has grown out of my deep conviction that Australia would somehow strike a direct blow against the invading enemy. It investigates also the possibility of success attendant upon such an attempt.

There have been a good many abstract warnings of late on the subject dealt with by me. Unfortunately the Australians, who have the reputation of being a rather imaginative people, seem to have no imagination at all where the future safety of the nation is concerned. The past warnings have been ridiculed as being unwarrantably pessimistic. One more bald statement would probably share the same fate. Apparently the Commonwealth can be roused to a sense of its danger only by patient investigation of its real position in the world and of the possibilities arising thence. That has been my purpose.

My book deals exclusively with realities. For this reason it is written in the form of a retrospection from the year 1922 upon events supposed to have happened less than ten years earlier, viz., in 1912. The nearness of the latter date has been decided on deliberately. A deferment of action to a later time would have made unavoidable the introduction of a fantastical element. Nobody can guess what the conditions may be even a decade hence. My purpose did not require the invention of unheard-of war engines or radical changes on the map of the world. On the contrary, the introduction of new factors, of things that do not yet exist, would only confuse the issue. But every thinking man can foresee the probable political developments of the next few years. I show what is possible under the known circumstances of the hour almost, to-day or to-morrow. And I think if that has no power to compel the citizens of the Commonwealth to seriously consider their position, no dreadful visions of a distant future will.

* This forecast romance is something more than a novel: it is a work. So as to secure quicker publication by giving larger instalments, it has been decided not to illustrate “The Australia Crisis”